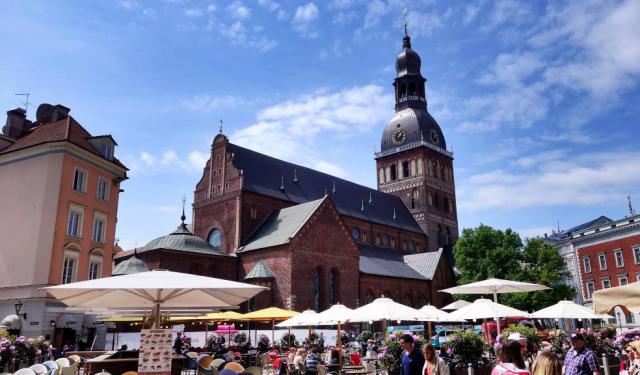 One great thing about Riga is that many of the city's religious buildings are concentrated in its historical center. A variety of faiths are represented in Riga, although the majority of city residents are Roman Catholic, Orthodox or Lutheran. Explore the historic churches and cathedrals of Riga on this self-guided tour.
Image Courtesy of Flickr and gula08.
How it works: Download the app "GPSmyCity: Walks in 1K+ Cities" from iTunes App Store or Google Play to your mobile phone or tablet. The app turns your mobile device into a personal tour guide and its built-in GPS navigation functions guide you from one tour stop to next. The app works offline, so no data plan is needed when traveling abroad.

Riga Cathedral is the oldest religious site in the city and one of the oldest in Latvia. Its foundation stone was laid on July 25th, 1211 by Bishop Albert of Riga. Originally, the church was built in a geometric, Romanesque style and was meant to become a centre of Christianity in the Baltic region. In the 14th-15th centuries it had side chapels and a western cross-nave added, along with the tower walls elevated and an octagonal spire built in. In the following centuries, the cathedral endured many reconstructions. The most drastic ones took place between 1881 and 1914, when part of the building was completely remodelled. Another reconstruction was undertaken in the 20th century. During the Soviet period, the cathedral was used as a concert hall.

Presently, the Riga Cathedral features a combination of Gothic, Romanesque, Baroque and Art Nouveau styles. Its key feature is the 6718 pipe organ, built by E.F. Walcker & Co in 1883-1884, which is considered to be one of the most precious organs in the world.

Today, the cathedral serves as the country's main Lutheran temple and is the seat of the Archbishop of Latvia Evangelical Lutheran Church.

Located in the old part of Riga, on Klostera Street, Saint James' Cathedral (or St. Jacob's Cathedral) is one of the oldest catholic temples in Latvia. The first mention of the church dates back to 1225, although the building itself is believed to have been in place since 1210, when Bishop Albert requested three churches to be built to serve rural parishes. In 1522, it became a Lutheran church, the first one to hold a Lutheran sermon in Latvian, although in 1584 it was given back to the Jesuits.

In the following centuries the church had changed hands several times, serving consecutively the Swedish, Russian and even Estonian Lutheran communities. In 1812, it was even used as a storage depot by the French troops. In 1901, Saint James' altar (oldest in Riga), built in 1680, was replaced with a new one. Since 1923, the cathedral has been in Catholic possession.

The church represents a mixture of Gothic and Romanesque architectural styles and is made of red brick and limestone. Art Nouveau motifs are also present in the decoration. The three floor Gothic tower is the only church tower left in Riga that has a spire. The cathedral forms part of the old Riga UNESCO world heritage site.

You can trace the history of this beautiful church back to 1209. Having such a long story to tell, it's not surprising that the tales are traced to the building styles of various periods. The church has Gothic, Romanesque, and Baroque elements.

Little remains of the original Gothic construction. Only the central section of the church, including the outer nave walls and a few pillars, remain from those early years.

The second construction period was overseen by master builder Johannes Rumeschottel from Germany. This was in 1409, but work was interrupted by wars and the plague. Nevertheless, by the late 15th century, the church had a mighty basilica with three aisles and vaulted ceilings. It also sported a new bell tower, 136 meters (446 feet) tall, with a steeple.

The final construction period occurred in the late 1600s when the western facade and new bell tower were built after a devastating fire in the city. Many of the furnishings and the vaulted ceiling were refurbished as well. When finished, the new tower and steeple was the tallest wooden structure in Europe.

The church was reconstructed after artillery fire destroyed it during World War II. The bronze candelabrum--a standing lantern--was taken from the church to Wloclawek, Poland. It was displayed there until 2012 when it was returned to Riga.

The steeple was completed in 1970, and the clock tower in the early 1970s. The rooster atop the steeple weighs 158 kilograms and includes 140 grams of gold plating. The bell plays the Latvian folk melody "Riga Resounds" five times a day, and the bell chimes hourly. There is an elevator that takes guests up the tower, where you can take in the view of Riga from a height of 72 meters (236 feet).

Today, the church is owned by the Evangelical Lutheran Church of Latvia. Services resumed here in 1991. In addition to the view from the tower's top, strolling through the art collection and seeing the beautiful nave are must-dos in Riga.
Image Courtesy of Wikimedia and Zairon.
4

Saint John’s Church is a 13th century temple presumably built by the Dominicans. Its original shape and location are unknown and may only be assumed. Legend has it that two monks were immured in the church's southern wall when it was built and were fed through a hole, which in the Middle Ages was considered a supreme form of asceticism.

After the Dominicans had been expelled from Latvia, the building was passed into private hands and turned into a stable; later on it was even used as a weapon workshop. In 1582, the church was sanctified again and returned to the Latvian parish. Five years later, it underwent major reconstruction and an altar was added.

Today, Saint John’s serves the local Lutheran community and forms part of Riga's Old Town area, remaining one of the top tourist sights in the city. Its Gothic interior, ascetic medieval outside appearance and rich history are equally appreciated by tourists and locals.
Image Courtesy of Wikimedia and Radosław Botev.
5

5) Cathedral of the Nativity of Christ

The Cathedral of the Nativity of Christ, also known as simply the Russian Orthodox Cathedral, is a Neo-Byzantine church designed by architect R.Phlug. The cathedral is considered to be the largest orthodox temple in the Baltic region and was erected with the blessing of Alexander II, the Tsar of Russia, between 1876 and 1883. The church features five domes with florid decorations on the exterior, while its interior is embellished with traditional icons, painted by Vasily Vereshchagin, and numerous gold plated items.

Two world wars had their toll on the building. During WWI, when Latvia was under the German occupation, the cathedral was converted into a Lutheran church. In 1918, it was given back to the Russians and, even though the local government wanted to impose Latvian as the main language for religious rituals, the cathedral’s masses were still held in Russian. During World War II, the cathedral was damaged both on the outside and inside, and in the 1960s it was closed down completely, transformed into a planetarium, with its interior refurbished and split into two levels. The upper floor held a scale model of the universe, while the lower was taken up by a conference hall and café.

In 1991, the cathedral was returned to its rightful owners, the Orthodox Russian Church. Since then there has been a profound restoration performed. Today, the building fully resembles the original 1883 look and is used for religious services again.
Image Courtesy of Wikimedia and Keith Ruffles.
6

Located at 6 Ģertrūdes Street, Old St. Gertrude is one of the oldest churches in Riga. It is named after Saint Gertrude of Nivelles who lived between 626 and 659. Before the current, red brick building was constructed, the site was occupied consecutively by seven wooden churches, each named St. Gertrude and burnt down by invading barbarians.

The present, Neo-Gothic style edifice was designed by J.D. Felsko, a prolific local architect. Works on the temple started in 1864 and continued until 1869. The brick walls were left uncovered on purpose, whereas the façade and the spire got embellished with concrete decorations.

The building has the shape of a cross, featuring a nave, incorporating three segments, and a shorter cruciform nave. The church organ was custom bought in 1906 at a cost of 8,000 roubles. The instrument is still functional and is a great pleasure to the ears of multiple worshippers and tourists who come to the church every day.

Old St. Gertrude Church is surrounded by a number of Art Nouveau buildings which are also well worth seeing.
Image Courtesy of Wikimedia and Syrio.

An architecture lover in general and that of Art Nouveau in particular will find plenty to look at in the quiet center of Riga. Jūgendstil (Latvian: Art Nouveau) architecture makes up roughly one third of all buildings in the heart of Latvia's capital. In fact, the city boasts the highest concentration of Art Nouveau structures anywhere in the world.

Constructed during a period of rapid...  view more

The area that is home to present-day Riga has hosted inhabitants since the days of the Vikings. With a sheltered natural harbor nearby, the River Daugava made Riga a stop on the Vikings' Dvina-Dnieper trade route to Byzantium.

Trade allowed the area to flourish, and the Livs, a Finnic tribe, settled it. In the early Middle Ages, the town's economy revolved around fishing, trading, and...  view more