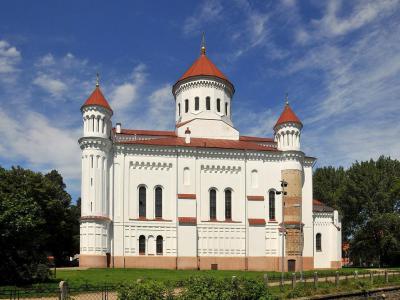 Cathedral of the Theotokos, Vilnius

The Cathedral of the Theotokos is one of the most ancient churches of Vilnius, built before the christianization of Lithuania when the Grand Duchy of Lithuania was the last pagan state in Europe. It became an important spiritual center for the growing Christian population of the duchy.

The cathedral was built during the reign of the Grand Duke of Lithuania Algirdas for his Orthodox second wife Uliana of Tver in 1346. In 1495 the marriage between Grand Duke Aleksandras of Lithuania and Helena of Moscow, daughter of Ivan III, was held in the cathedral in the presence of Saint Macarius. It was there that Helena was buried in 1513. In 1748, the cathedral was abandoned after a major fire and the building was used for various other purposes. It was reconstructed in the Baroque style in 1785. The cathedral was once again destroyed by the Russian army during the Kościuszko Uprising.

The cathedral of the Theotokos was damaged during the Second World War but was restored in 1948, although its renovations were not completed until 1957. Today the cathedral belongs to the Russian Orthodox Church and was once again renovated in 1998. Its services are attended mostly by ethnic Russian and Belarusian residents of Vilnius.
Image by FaceMePLS on Wikimedia under Creative Commons License.
Sight description based on wikipedia