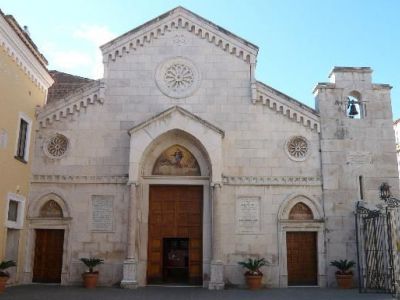 The Sorrento Cathedral is dedicated to the Virgin of the Assumption and the Apostles Philip and James. The cathedral was consecrated in 1113. It underwent several significant changes in the years 1450 though 1573.

Its appearance was initially in the baroque style but the facade was redone in 1924 in a neo-Gothic style. The church is built on the remains of an ancient Greek temple (thought to be dedicated to Zeus). There are three entrances. The 16th century main entrance, in the center of the facade, is flanked by ancient marble columns.

The columns support the ogival arch of the center. On the three entrances are lunettes. The central lunette is for the Virgin, the smaller lunettes are for Philip and James. The upper part of the facade has battlements and a blind rose window.

The interior takes the shape of a Latin cross with three naves. The naves are set off by 14 pillars. The ceiling is flat with canvas paintings of 2nd century martyrs. The dome was frescoed in 1902 by Pietro Barone and Augusto Moriani. On the right side of the altar is the chapel where the poet Torquato Tasso was baptized.

The bell tower is almost 200 feet away from the church with an 11th century Romanesque base. It has four square sections with arches, niches, cornices, ceramic tiles and a clock.
Image Courtesy of Wikimedia and Medan.

Want to visit this sight? Check out these Self-Guided Walking Tours in Sorrento. Alternatively, you can download the mobile app "GPSmyCity: Walks in 1K+ Cities" from iTunes App Store or Google Play. The app turns your mobile device to a personal tour guide and it works offline, so no data plan is needed when traveling abroad.