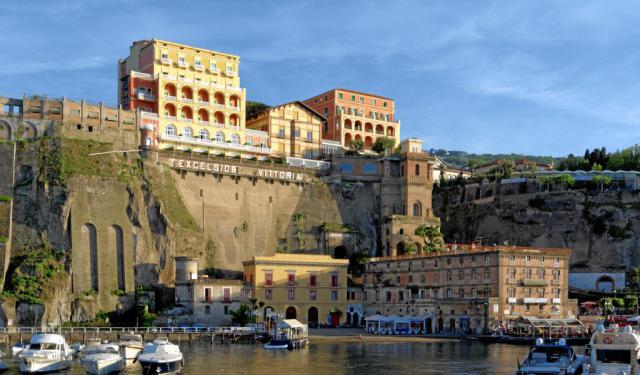 Image by Berthold Werner on Wikimedia under Creative Commons License.

Sorrento, the coastal town in southwestern Italy, overlooking the Bay of Naples from the towering cliffs high above, is known not just for its beautiful marinas and sweeping views. Architecturally, the city is just as rich and has a bunch of man-made attractions fit to impress. Among them Piazza Tasso, a cafe-lined square in the historic center which houses, among other sights, the Chiesa di San Francesco, a 14th-century church. To appreciate Sorrento in its variety, follow this orientation walk and see other attractions the city has to offer.
How it works: Download the app "GPSmyCity: Walks in 1K+ Cities" from iTunes App Store or Google Play to your mobile phone or tablet. The app turns your mobile device into a personal tour guide and its built-in GPS navigation functions guide you from one tour stop to next. The app works offline, so no data plan is needed when traveling abroad.

Piazza Tasso is the main square situated in the heart of Sorrento. It's the most visited place in the city. The square is named after one of Italy's most famous poets, Torquato Tasso. In the piazza, you can find interesting shops and bars and the beautiful Church del Carmine.
Image by Berthold Werner on Wikimedia under Creative Commons License.
2

2) The Valley of the Mills

The Valley of the Mills is a spectacular natural valley located in the historic center of the city, behind Tasso Square. In this area you can admire the historic remains of a mill, sawmill and public wash-house. The site also offers stunning natural views.
Image by Mentnafunangann on Wikimedia under Creative Commons License.
3

The Cathedral of Sorrento dates back to the 15th century and was built in the Romanesque style. It has a great collection of pieces made by artists of the Neapolitan School, dating back to the 18th century. The church holds the baptistery of Turquato Tasso, who was christened here. It was restored in 1933. Other valuable pieces include the marble archiepiscopal throne, dating back to 1573, and the ceiling, which is ornamented with beautiful paintings.
Image by Medan on Wikimedia under Creative Commons License.
4

One of the world's finest pedestrian shopping streets, Corso Italia is extremely popular with tourists both foreign and Italian and is a lively place as well as safe and clean. This ancient cobbled street leads to Via Tasso, providing an experience for all your senses with its exciting colors, aromas and sounds along the way – but there are restaurants and more shops in all the narrow side streets between the Corso Italia and the Mediterranean. Consider walking along the street at night just to enjoy the atmosphere and get to restaurants. It is nearly impossible to miss anyway!
Image by Mister No on Wikimedia under Creative Commons License.
5

A trip to Sorrento isn't complete without a stroll down the narrow character-filled lane known as Via San Cesareo. It is the heart of the old town, a street filled with artisan shops, restaurants and limoncello makers. Stop in and taste the fresh-made liqueur in its hometown. There are local-made leather crafts, ceramics and wood inlay, along with food stores, wine bars and vegetable stands. It is teeming with life, attracting both tourists and locals.

There are a few churches to pop into, so keep your eyes open for those, and don't miss the cross-vault covered and frescoed portico at the Sedile Dominova, where old guys gather at tables to play cards by day, and music is often played at night.

There are other narrow streets leading off Via San Cesareo, also with restaurants, flowers cascading down walls, shops and character. It's a slice of Sorrento life you won't want to miss! ***PH****

Image by Emily Stevenson on Flickr under Creative Commons License.
6

The Church of Saint Antonino was erected in the 11th century in the place of a former oratory. The basilica has a mix of architectural elements, like the columns that were probably taken from a Roman villa, and the south portal that was built in the Byzantine-Romanesque style. The crypt contains some small pictures dating from the 18th century. All these elements together make the church unique and attractive.
Image by Berthold Werner on Wikimedia under Creative Commons License.
7

The Church of Saint Francesco dates back to the 8th century, but it has since been reconstructed. In the 14th century the church was rebuilt in the Baroque style and dedicated to the Franciscan friars. Next to the church are the monastery and the cloister, also dedicated to San Francesco. The cloister is an amazing mix of many architectural styles and is a sight to behold.

***Next to the Church of San Francesco there is a small door that will lead you to a magical place: the cloister of San Francesco, crossing the threshold you immediately feel a mystical atmosphere, silence and peace are the first thing you notice leaving behind the narrow door. A particular light illuminates this place especially during certain hours of the day where the sun's rays create a suggestive contrast with the shadows of the colonnade. At the center of the cloister stands a tree with an oblique trunk that frames the many weddings that are celebrated in the hottest periods of the year. To the right of the particular plant the bell tower rises above the walls.

Image by SeveroAntonelli on Wikimedia under Creative Commons License.
8

This landscaped park commands stunning views across the water to Mt Vesuvius. A popular green space to while away the sunset hours, it’s a lively spot, with benches, operatic buskers and a small bar.

*** The Sorrento Lift is also located in the park. It provides access between Villa Comunale Park and Marina Piccola. This is a really useful facility to know about if you're visiting Sorrento as it can save you a lot of time and energy. It allows visitors to easily reach the hydrofoils ferries and the beach, ***PH***
Image by Harvey Barrison on Flickr under Creative Commons License.
9

Piazza della Vittoria offers visitors a tremendous view over Sorrento's bay. There are benches where people can sit and just enjoy the natural beauty surrounding them. It is believed that the square is located where, many years ago, a Roman temple dedicated to Venus once stood.
Image by Berthold Werner on Wikimedia under Creative Commons License.
10

The hamlet of Marina Grande, which is located just Beyond theheadland, sheltered by high cliffs on the both sides, is certainly one of the most authentic of Sorrento, animated by a fishing community that surrounds the Church of St.Anne, whose feast day is celebrated on 26th July with impressive firework displays.

Built towards the end of the seventeenth century, the Church has a single rectangular nave with a barrel vault. There is a polycrome Marble parapet above the high altar, where is a small temple there is a statue of St.Anne. There is also an eighteenth-century sculpture depicting St. John the Baptist and an impressive hand-made Christ Crucified.

The small village can be reached on foot via the ancient Greek port of Marina Grande, dated the third century B.C.

In the hamlet, where in the past the typical Sorrento fishing boats were built, there are bars, restaurants and beaches to the delight of the many holidaymakers who come to sunbathe on the beach, that ismore than two hundred metres long, or on the platforms equipped with sun loungers and parasols.

***PH***
Image by Davidhermanns on Wikimedia under Creative Commons License.