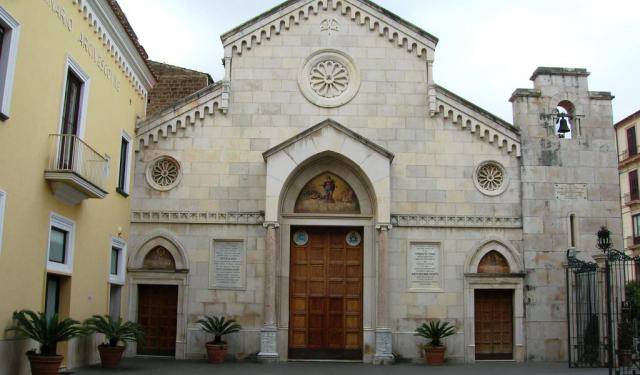 Sorrento has a rich culture and history. The influence of different historical periods can be seen in the center of the town, where a number of notable buildings have withstood the test of time. In Sorrento you can also find a number of beautiful churches and monasteries, which keep the history and the valuable memories of the city alive. Take this self-guided walking tour to discover Sorrento's picturesque religious sights and historic gems.
Image Courtesy of Wikimedia and Mentnafunangann.
How it works: Download the app "GPSmyCity: Walks in 1K+ Cities" from iTunes App Store or Google Play to your mobile phone or tablet. The app turns your mobile device into a personal tour guide and its built-in GPS navigation functions guide you from one tour stop to next. The app works offline, so no data plan is needed when traveling abroad.

The Church and Cloister of Saint Francis is near to the public gardens of Sorrento with stunning views of the fabled Gulf of Naples. The church was built in the 8th century. Originally it was an oratory founded by Saint Antonino dedicated to Saint Martin of Tours. It was reconstructed in Baroque style by the Franciscans in the 14th century.

The Church has a simple white facade. The facade is divided in two parts. On the lower part, the well preserved 14th century portal is flanked by five pilasters on each side. There are two arched blind windows on either side of the portal. In the left window is a painting of Saint Francis. A similar portrait of Saint Antonino appears on the right.

The upper part of the facade has a mullioned rose window in the center flanked by two pilasters on each side. A scalloped roof front surmounts the crenelated edges of the upper facade.

The church has one nave and six chapels. On the right facing the altar, in the first two chapels, are statues of Saint Francis and Saint Antonino. On the left we may find a statue of Saint Rita of Cascia and a statue of the Immaculate Madonna. Above the altar is a 1735 painting of St Francis with the stigmata.

In the sacristy are several marble artifacts from different eras. In the reception hall there is a 16 century painting of the Madonna and infant with Saint Michael and John the Baptist.

Next to the church is the monastery cloister of San Francis. The cloister was founded in the 7th century but it was ceded to the Franciscans in the 14th century. The cloister is a mish-mash of architectural styles. Two sides of the porch have crossed 14th century tuff arches. Two other sides have rounded arches on octagonal columns.

Architectural artifacts extracted from ancient temples and buildings have been integrated into the construction of the cloister. The cloister is often used for art exhibitions and musical events. It is also a popular venue for weddings.


Image Courtesy of Wikimedia and SeveroAntonelli.
2

Theater Tasso is located in the Square of San Antonino. The theater has been closed for almost a decade and has undergone some reconstruction, although it retains its original 16th-century architecture. Here, in 1920, the first performances on the peninsula took place. Teatro Tasso offers different musical shows and interesting programs to suit everyone's taste.
Image Courtesy of Wikimedia and Berthold Werner.
3

Leaving Tasso Square, walk along De Maio Street. After a short walk arrive at the Saint Antonino Square. The church will be on the right. Saint Antonino is the patron saint of Sorrento. He arrived in Sorrento in the 6th century, seeking refuge from the Lombard invasions of Italy.

One day a whale came up to the beach at Sorrento and swallowed a boy. Not to worry. Antonino got the boy out, safe and sound. Saint Antonino is credited with this and other miracles and he is the patron saint of shipwrecked seafarers. At the entrance to the church is a set of whale bones to memorialize the miracle of boy meets whale.

The Church of Saint Antonino, built in the 11th century, stands over a 7th century oratory built to cover the bones of the Saint. The grey tuff facade is Romanesque. The facade and the bell tower date from the 18th century. There are three naves divided by twelve Corinthian style columns salvaged from ancient Greek and Roman buildings.

At the time of his death, the story goes, Saint Antonino said he did not wish to be buried within or without the city. So, he was put to rest between the walls. In the crypt is a life-like statue of the saint. On one wall are paintings of ships at sea. On another wall are silver talismans of believers who were saved by his grace.
Image Courtesy of Wikimedia and Berthold Werner.
4

Sedile di Porta is a historic building located in the Piazza Tasso. It was built near the main gate of the city, when the area that is now Piazza Tasso was called Largo del Castello. Because the building was located close to the gate, it received the name di Porta. Over the years, it has served as a prison and guard house, and today the Sedile is home to the Sorrento Club.
Image Courtesy of Flickr and Dennis from Atlanta.
5

The Church of Carmine likely dates back to 240-230 A.D., around the start of the persecutions against Christians in Sorrento. At the end of the 16th century the church was rebuilt in the Baroque style. Here you can see the image of Madonna, which is a duplicate of the Vergine Bruna of Naples, as well as a lot of beautiful artwork from the 17th and 18th centuries.
Image Courtesy of Wikimedia and Berthold Werner.
6

The Bell Tower has great historic importance, because its small arched rooms and the vault on Via Peta, at the entrance of the Bishop's Palace, served as a place for the people of Sorrento to meet. The columns and shapes at the base of the tower have Romanesque-Era influences. The upper part of the tower was probably rebuilt to its current size in the 15th century.
Image Courtesy of Flickr and Paul and Jill.
7

The Sorrento Cathedral is dedicated to the Virgin of the Assumption and the Apostles Philip and James. The cathedral was consecrated in 1113. It underwent several significant changes in the years 1450 though 1573.

Its appearance was initially in the baroque style but the facade was redone in 1924 in a neo-Gothic style. The church is built on the remains of an ancient Greek temple (thought to be dedicated to Zeus). There are three entrances. The 16th century main entrance, in the center of the facade, is flanked by ancient marble columns.

The columns support the ogival arch of the center. On the three entrances are lunettes. The central lunette is for the Virgin, the smaller lunettes are for Philip and James. The upper part of the facade has battlements and a blind rose window.

The interior takes the shape of a Latin cross with three naves. The naves are set off by 14 pillars. The ceiling is flat with canvas paintings of 2nd century martyrs. The dome was frescoed in 1902 by Pietro Barone and Augusto Moriani. On the right side of the altar is the chapel where the poet Torquato Tasso was baptized.

The bell tower is almost 200 feet away from the church with an 11th century Romanesque base. It has four square sections with arches, niches, cornices, ceramic tiles and a clock.
Image Courtesy of Wikimedia and Medan.
8

Sedile Dominova is the only evidence in Campania of the old nobles known as Sedili. The building dates back to the 16th century. It has a square shape with two arches that provide a view of the interior walls decorated with interesting frescoes.
Image Courtesy of Wikimedia and Mister No.
9

The Church of Rosario, also known as The Church of the Santi Felice e Baccolo, is considered to be one of the most beautiful Baroque churches in Sorrento. It is a very important historic place, as it functioned as the Cathedral of Sorrento from the 12th to the 15th centuries.
Image Courtesy of Wikimedia and Mentnafunangann.
10

In 420 BC, as Greek influence began to wane in the ancient town of Sureo before it became known as Sorrento, the Samnites invaded the south. But Sureo was protected by its Greek fortifications and the Sammnites stopped at Naples. The walls of Sorrento have always protected the town. Today they are a defensive anachronism, but they are in better shape than ever.

Ruins of the ancient Greek and Roman walls were discovered during excavations of the Parsano Gate in 1921. This was verified by a plaque thoughtfully installed there in the age of Augustus. The Romans had filled and bricked up the Greek gateway.

In the time of the Roman Empire the town was completely wrapped in walls. There were five fortified gates guarding against attacks from the sea or land, especially from the sea. When attackers were sighted alarms would sound, calling people to come inside the walls.

During Spanish rule a renewal of the walls was begun in 1551, after the end of the wars between the Angevins and the Aragonese. It was a little late for that, however. The Saracens successfully invaded in 1558, breaking through the Big Marina Gate. The movement to strengthen the walls and gates then became the all-important thing to do.

Spanish engineer Pedro Trevino rebuilt the south wall with tufa blocks plastered over. The Greek and Roman fortifications were preserved where possible. He restored four remaining bastions and joined them together with tracks called "corrine."

The Parsano Gate was built in the 17th century. Originally called the Gate of Anastasi, it was built on the ruins of the old Greek walls. Visitors are allowed to enter from 10 am until 1 pm during the day and from 7 pm until 11 pm at night.
Image Courtesy of Wikimedia and Витольд Муратов.