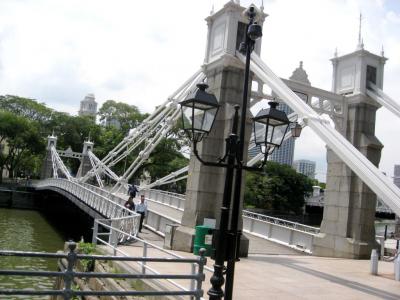 Spanning the Singapore River with elegant suspension struts between the Empress Place and Fullerton Building (currently Hotel), Cavenagh Bridge is one of the witnesses of Singapore's eventful history. This is the only bridge to have survived intact in its original form since construction in 1869, when it replaced its rudimentary pedestrian predecessor.

Initially known as Edinburgh Bridge, called so to commemorate the visit by Duke of Edinburgh, it was eventually renamed in honor of Major General William Cavenagh, the last India-appointed Governor of the Straits Settlements. The bridge itself was built in Glasgow and then shipped to Singapore in sections where it was assembled by Indian convict laborers. In 1910, when the nearby Anderson Bridge was completed, the Cavenagh was to be demolished, but, fortunately, that decision was scrapped in favor of converting it to a foot bridge. Presently, as long as the pedestrians who cross it weight not more than 152kg or 336lbs individually – which is the technical restriction – they are welcome to pass!

Why You Should Visit:
A historic bridge right next to the Fullerton Hotel. Apart from the lovely views up and down the river and the historical significance, which is a big draw to the Cavenagh, there is an undeniably cute bronze family of cats – a cat and two kittens – to be found at the end of the bridge, near the hotel. On the opposite side there are bronzes of the children leaping into the water so tempting to follow their suit.

Tip:
More photo opportunities of sculptures depicting life back in the days of yore are readily available on the south side.
Image by Xuanxu on Flickr under Creative Commons License.