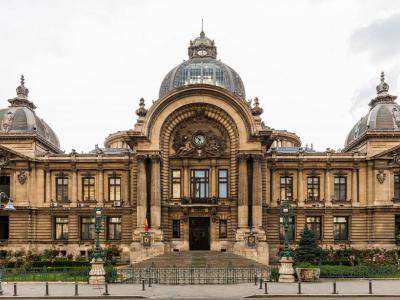 The CEC Palace in Bucharest, built in 1900 and situated on Calea Victoriei opposite the National Museum of Romanian History, is the headquarters of the national savings bank C.E.C., nowadays called the CEC Bank.

Before the construction of the palace, the location was occupied by the ruins of a monastery (Saint John the Great) and an adjoining inn. The 16th-century church was renovated by Constantin Brâncoveanu during 1702-1703, but later fell into disrepair and was demolished in 1875. The palace was built as a new headquarters for Romania's oldest bank, the public savings institution Casa de Depuneri, Consemnaţiuni şi Economie, later known as C.E.C. The land was bought and the building was constructed with the institution's own funds. Work started on June 8, 1897 and was completed in 1900. The project was designed by architect Paul Guttereau, a graduate of the École Nationale Supérieure des Beaux-Artsin Paris; the construction was supervised by Romanian architect Ion Socolescu.

After 106 years of service, the building was deemed no longer fit for modern banking and was therefore sold for €17.787 million to the municipality of Bucharest to be used as a museum. Although no longer open to CEC clients, the bank continues to rent the building as its headquarters until a suitable replacement is found or built.

Eclectic in style, the palace is topped by a glass and metal dome. The entrance features an arch supported by two pairs of columns in composite style. The four corners are decorated with gables and coats of arms and ending in Renaissance domes.
Image by Nicubunu on Wikimedia under Creative Commons License.
Sight description based on wikipedia