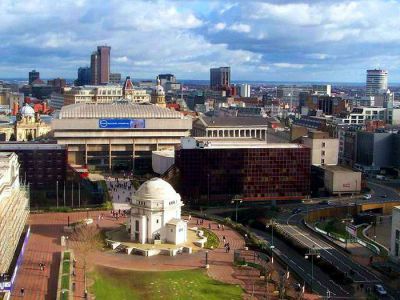 Centenary Square in Birmingham is a public square named so in 1989 for the centenary of Birmingham becoming a city. Previously, this was an industrial area filled with small workshops and canal wharves up until the 1920s when it was bought by the city council to create a grand civic centre comprising museums, council offices, cathedral and opera house. That project, however, had to be abandoned due to World War II, seeing only the Hall of Memory and half of the planned Baskerville House brought to completion. In 1991 the square was remodeled in tune with the new International Convention Centre, featuring new paving resembling a Persian carpet, railings and lamps, a fountain and several sculptures, including the controversial sculpture called "Forward" by Raymond Mason. Later, in 2013, during the construction of the Library of Birmingham, several of the 1991 design elements had to be removed to give way to a library amphitheatre. Today the square serves as a major cultural venue, hosting events like seasonal markets, arts festivals, commemoration services, New Year's Celebrations and, during Christmas, a temporary ice rink and Ferris wheel.
Image by Andy G on Wikimedia under Creative Commons License.