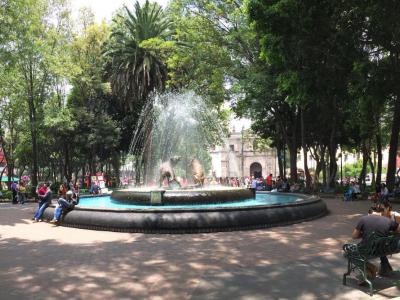 Centennial Garden and Fountain of the Coyotes, Mexico City

If you seek to escape the bustle and clamor of Mexico City for a few hours for a chance of great lunch/dinner or a nice stroll in the park, or to enjoy some classic Spanish colonial architecture, or to find some cute, easy streets for a walk and photo shooting, you can find it all in the historic part of Coyoacán centered on two large plazas filled with Indian laurel trees, called Plaza del Centenario and Plaza Hidalgo, also known as Jardin del Centenario (Centennial Garden) and Jardín Hidalgo.

The two plazas cover a vast space of 24,000m² and were thoroughly renovated, paved with red and black volcanic stone, back in 2008, along with the surrounding streets. For decades, prior to the renovation, these plazas, especially Plaza Hidalgo, had been filled with vendors, most of which are now gone.

Plaza del Centenario, to the west of Hidalgo, is slightly smaller and originally formed part of the very large atrium that used to belong to Parish of San Juan Bautista during the colonial period. A stroll through Plaza/Jardin del Centenario is a must when visiting Coyoacán. In the center of it, there is a fountain featuring a bronze sculpture of two coyotes surrounded by jets of water, referring to the etymology of the borough's name (Aztec: “Land of the Coyotes”). Historians say, these animals were once commonplace in this part of the Mexican valley and, as such, bore a great significance in the Aztec cosmovision. The iconic Fountain of the Coyotes was built in 1967.

Another notable landmark here is Los Arcos del Jardin Centenario (the Arches of Centennial Garden). Together with the fountain they create a perfect setting for the weekend fun enhanced with various attractions such as music, craft markets, mimes, and street vendors. The garden was inaugurated in 1921 to commemorate the centenary of Mexican independence. The south side of the garden is lined with restaurants and a wide range of bars and cafes, including the well-known Café El Parnaso, offering a choice of Mexican food, ice creams and more.
Image Courtesy of Flickr and TJ DeGroat.