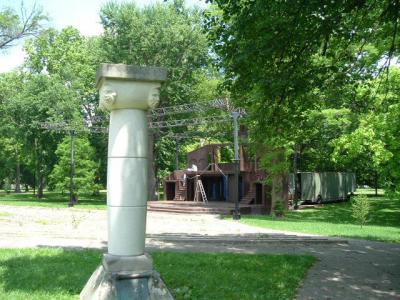 Old Louisville's Central Park has a long and interesting history. It was originally the country estate of the DuPont Family and early on served as the site of the Southern Exposition which later became known mostly for hosting the Kentucky Shakespeare Festival and northern portions of the annual St. James Court Art Show.

Interest in developing park space for Louisville's growing population arose in the late 1860s. On June 15, 1872 the DuPonts decided to open the front lawn of their estate to the public thus enabling the city to finally have its own park. During the Southern Exposition in 1883, 13 of the park's 17 acres (69,000 m2) were temporarily "roofed in" and used to showcase Thomas Edison's light bulb, one of the first large-scale public displays of the light bulb in the world. In 1885, the park was unroofed and was instead used as an outdoor exposition with an Edison-designed electric trolley line transporting visitors around the park to see such sites as a roller coaster, bicycle trails, and an art museum surrounded by a lake.

In 1901, the DuPonts hired nationally renowned landscape architect Frederick Law Olmsted to draw up a ground plan which came to fruition in 1904–05 seeing the old DuPont mansion demolished and the basic outlines of the park, as seen today, put into place. Olmsted also created a wading pool and athletic fields. The original walking trails from Louisville's 1883 Southern Exposition, which spilled over into the DuPont estate, were kept in place.

In 2004, the park celebrated its centennial. It is now fast becoming an entertainment destination. Besides the C. Douglass Ramey Amphitheater, where the Kentucky Shakespeare Festival is held, the park includes the Old Louisville Visitors Center used to educate guests from out of town, as well as a community meeting space. It also has tennis courts and a sprayground.

Designed as a place of relaxation where people could take a walk, admire the pond, have a picnic and generally enjoy themselves, Central Park often hosts diverse concerts, celebrations and other events. Among them are the Old Louisville LIVE concert series, Jazz in Central Park, and an annual Halloween event called Victorian Tales of Terror.
Image Courtesy of Wikimedia and Brando03.
Sight description based on Wikipedia.