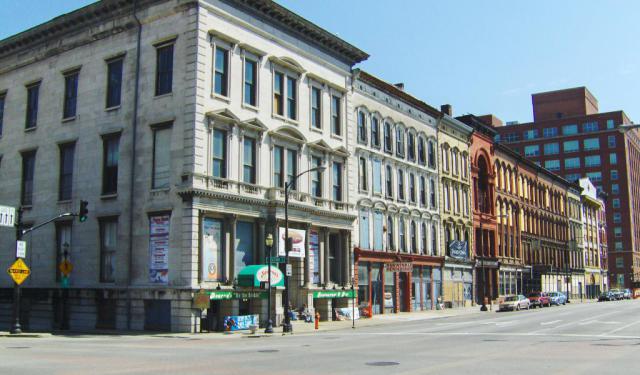 Image by vxla on Flickr under Creative Commons License.

Louisville is a city famous for its architectural masterpieces of different styles and ages. The present guide presents the most distinguished buildings in the city. The combination of sizes, age and architectural directions form a beautiful and unique city panorama. Tourists will be able to admire splendid Romanesque, Neo-Gothic, Classic Revival and Beaux-Arts architecture. Use the present self-guided tour to start your journey to the precious architectural treasures of Louisville.
How it works: Download the app "GPSmyCity: Walks in 1K+ Cities" from iTunes App Store or Google Play to your mobile phone or tablet. The app turns your mobile device into a personal tour guide and its built-in GPS navigation functions guide you from one tour stop to next. The app works offline, so no data plan is needed when traveling abroad.

Whiskey Row in Downtown Louisville is considered a historic heritage of the city. It was named this way due to the initially elevated number of buildings with whiskey shops and distilleries. All the buildings in this quarter utilized cast iron architecture, but the styles of the structures differ. Besides New York's SoHo district, the Iron Quarter, which is the other name of Whiskey Row, has the biggest number of cast iron structures. The most talented architects who worked on the design of the buildings were John Andrewartha, Henry Whitestone and Dennis Xavier Murphy. Recently, the quarter obtained the status of National Landmark.
Image by vxla on Flickr under Creative Commons License.
2

The Old Bank of Louisville's building was constructed and founded in 1837. In August, 1971 it was listed in the National Register of Historic Places. The design of the structure belongs to the Greek Revival architectural style and it was developed by James Harrison Dakin - an American architect and designer. The materials used for the construction of the Old Bank were mainly limestone and brick. The most distinguishing details of the building are the front entrance and the two grand columns supporting the facade.
Image by Nyttend on Wikimedia under Creative Commons License.
3

The Levy Building is one of the most important representations of Richardsonian Romanesque architecture in Louisville. It was constructed in 1893. Initially the building used to house one of the most popular department stores in the city. Nowadays it houses the Spaghetti Factory Restaurant on the first floor and condos on the upper ones. The structure is not only famous for its architectural importance, but also for the fact that it was one of the first structures in Louisville that was provided with electricity.
Image by vxla on Flickr under Creative Commons License.
4

The City Hall of Louisville's construction took place between 1870 and 1873. While the exterior of the structure remained allmost unchanged throughout its history, the interior was exposed to a number of grand restorational works. The architecture of the building is a succesful combination of Second Empire, Italianate, Beaux Arts and Romanesque Revival. In 1909 an attachment was linked to the main building. The annex was designed in Greco-Roman style by Cornelius Curtin. The most beautiful part of City Hall is the clock tower, which was completed three years later after the building itself.
Image by Bedford on Wikimedia under Creative Commons License.
5

The architect, Gideon Shryock, had intended for the courthouse to have a six-column Doric portico, a cupola, and additional porticos on the wings. The building would be completed by metopesand plain friezes as a full entablature, and engaged pilasters regularly sequenced. Shryock resigned from the project in 1842. It was finally completed in 1860, with Albert Fink, a bridge engineer, and Charles Stancliff in charge. Fink reduced the number of columns for the Doric portico, and did not build the additional porticos and cupola. The Louisville Daily Journal said it was a "elephantine monstrosity".

Image by oxfordblues84 on Flickr under Creative Commons License.
Sight description based on wikipedia
6

6) Cathedral of the Assumption

The Cathedral of the Assumption is one of the most famous churches in Louisville. The building was built and dedicated in 1852. It was built on the grounds of the former Saint Louis Church and is a larger version of it. Throughout its existence, the church was exposed to a series of renovations. The structure was designed in Neo-Gothic architectural style. Both the exterior and the interior are adorned with rich decorational elements, including wood carved bosses, frescoes, arched windows and a beautiful grand organ, which is the focal point of religious events.
Image by Scott Ritchie on Flickr under Creative Commons License.
7

Image by Nyttend on Wikimedia under Creative Commons License.
Sight description based on wikipedia
8

The Louisville Free Public Library (LFPL) is the largest public library system in Kentucky. Officially opened in 1908, the library's main site resides south of Broadway in downtown Louisville. Additional branches were added over time, including the Western Colored Branch, which was the first Carnegie-housed library in the U.S. built solely for African Americans. In 1950 the library became the first library in the nation to put its own FM-radio station on the air – WFPL.

In 1969, a $4 million north building was added to the Revival-style Carnegie structure. This provided an additional 110,000 square feet (10,000 square meters) of floor space, compared to the 42,000 in the original building. At one time LFPL had over 30 branches, but because of lack of funding a number of branches were forced to close. Currently, there are 16 branches, in addition to the main library site. Internet services and inter-library loan have helped to make up for fewer branches.

Image by w.marsh on Flickr under Creative Commons License.
Sight description based on wikipedia

The Butchertown neighborhood is a very picturesque part of Louisville. The beautiful bridges over the Ohio River, the sophisticated churches' architectural styles and the fantastic parks are the perfect place to walk around. The Thomas Edison House and Kaviar Forge and Gallery are also popular places in this area, due to their uniqueness and spirit. Use the present guided tour to admire the...  view more

Old Louisville is a perfect area in which to travel through the history of the city. It is where the oldest and most special buildings and other reminders of the past are concentrated. Structures of the most diverse ages and architectural styles are adorning the streets of Old Louisville. Take the present self-guided tour to learn many interesting facts about the city's past and admire the...  view more

Louisville, Kentucky's largest city, is a treasure trove of themed attractions. History and science buffs will certainly take interest in the Frazier International History Museum, Louisville Science Center, and the Thomas Edison House. If you're big on sports, consider the Louisville Slugger Museum and Factory, celebrating baseball, and the Muhammad Ali Center. If you're keen on...  view more