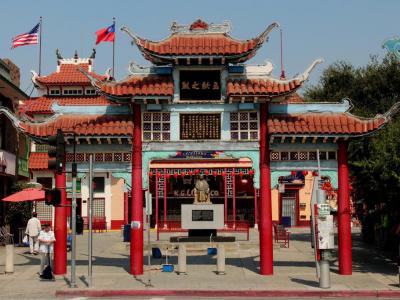 The East Gate is one of the many famous golden landmarks in Old Chinatown Plaza. This grand entrance is located on the east side of the plaza, on Broadway between West College Street and Bamboo Lane, and is particularly photogenic at night, when brightly illuminated with neon lights, giving out a romantic glow to the nearby shops, restaurants, fortune tellers, and other inhabitants of Chinatown. The very first lighting ceremony of the East Gate took place on the first anniversary of New Chinatown in 1939. This historic event reprized years later, in 1985, when the East Gate was ceremoniously refit following a major rehabilitation and beautification effort by the Chinatown Project of the Community Redevelopment Agency.

Otherwise known as the Gate of Maternal Virtues, the East Gate was erected by attorney You Chung Hong in honor of his late mother. The four character poem inscribed on the gate says, “The spirit of (Mother) Meng and (Mother) Ow.” These women were exemplary mothers in the history of China, and so were appropriately revered by their offspring, as each child in Chinese culture reveres and respects their mother.

As you walk through the gateway, you may recognize some of the settings used in many Hollywood productions, TV shows and commercials. Among these TV shows are Hunter, The Rockford Files, Hart To Hart, Beverly Hills, 90210, and Melrose Place. The motion pictures include Lethal Weapon 4, Rush Hour, 8 Millimeter and, of course, Chinatown.

To the right of the gate is a tower with the Dragon Chasing Pearl mural originally painted in 1941 by Chinese-American artist Tyrus Wong. The legendary artist, who passed away in December 2016 at the age of 106, was renowned for his work in film, particularly as the lead artist on Disney's Bambi.

Also nearby is a home decor shop Realm which, years earlier, was the site of Hong Kong Cafe, a restaurant that became a cornerstone in the city's punk rock history. You'll even find a photo of L.A. punk icon, Alice Bag, hanging on the wall.
Image by Prayitno on Flickr under Creative Commons License.