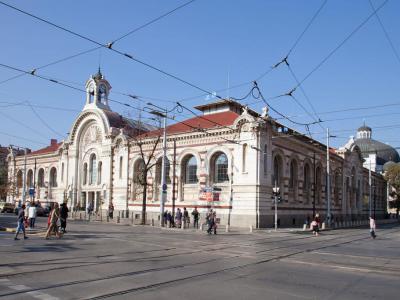 The official name in English is Central Sofia Hall, but it is popularly known as "The Market Hall." It is a covered market in the center of town on Marie Louise Boulevard. It was designed by Bulgarian architect Naum Torbov and it opened in 1911. Until 1950 the city rented out 170 shops in the Hall. The market was closed in 1988 for alterations.

The market was modernized and it opened again at Easter time in 2000. The Central Sofia Market Hall employs more than 1,000 people. There are three floors of shops for foodstuffs, fast food, clothing, jewelry, and accessories. The building as designed by Torbov remains. It is regarded as his best work.

The style of construction is Neo-Renaissance with Neo-Byzantine and Neo-Baroque elements. On the facade, above the main entrance, is the coat of arms of Sofia installed by artist Haralampi Tachev. The clock tower has three clock dials. There are four entrances, but not all are in use. There is a parking area in front of the hall.
Image Courtesy of Wikimedia and Bin im Garten.