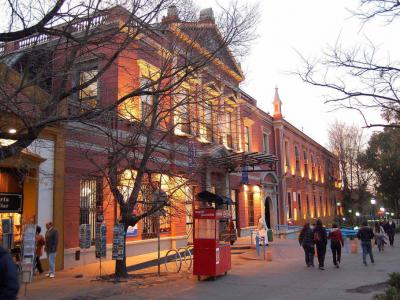 The building where the cultural centre is located was originally donated to the Franciscans in 1716. The blueprints of the construction were drawn by Jesuit architects Juan Krauss and Juan Wolf, while the design of the façade and interiors are attributed to Andrés Blanqui.

The building, finished in 1732, is one of the oldest in the city. With the arrival of the May Revolution and the declaration of independence during the first part of the 19th century, the building changed purposes. Manuel Belgrano founded a drawing school there, and since the 1870s it served as a shelter for the destitute. Torcuato de Alvear, first mayor of Buenos Aires, beautified Recoleta as well as the cultural centre; Juan Antonio Buschiazzo gave it an Italian style and created the chapel currently used as an auditorium.

Today, the Centro Cultural Recoleta holds sculptures and exhibitions, as well as concerts and artistic presentations and workshops of diverse types. In 2006 it held the wildly successful 'onedotzero' festival attracting over 20,000 people in 3 days for installations, live performances, screenings and music.

Why You Should Visit:
Dozens of exhibitions running at the same time, from modern to avant-garde (including a variety of areas for paintings, sculpture, drawings, photography, etc.), and mostly by Argentines – a nice change from other museums where the European-ish flavor dominates. Most of the time, two or three of the exhibitions are just amazing. For a free entrance place, it's all in all quite marvelous.

Tip:
Great place to go on the weekends, as there's always something interesting to do/try/see/experience. Events mostly happen during the evening-night time.

Buenos Aires is Argentina's most popular tourist destination. And it is the world capital when it comes to passion expressed in the rhythm of tango. This form of dance originated in the country and many of its styles were first developed here. So if you decide to spend your night moving in tango rhythms, here's our list of top tango spots in Buenos Aires.