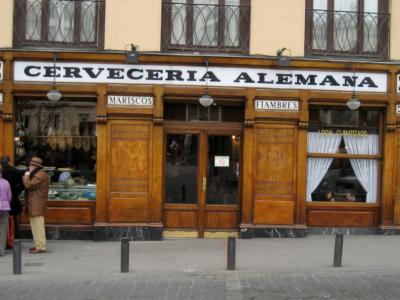 Sitting on the southern edge of Plaza de Santa Ana, Cervecería Alemana ("German Beerhouse") was once the favorite taproom of Ernest Hemingway and many other celebrities of the day including Ava Gardner, each of whom either lived in or visited Madrid quite often throughout the 20th century.

Established in 1904 by a group of German manufacturers, hence the name, this brewery is still "a good place to drink beer and coffee," – as Hemingway once put it in his article in Life magazine – to be shared, if lucky, with "the most beautiful woman in the world". His regular table here still stands in the near right-hand corner and it feels every bit as though the man himself might walk through the door at any moment. This classic Spanish beer hall prefers buckets of olives to preening pretentions of city life, with wooden beams, hat racks and black and white photos from old bullfights.

The food fills, the beer range (German, Belgian and Spanish) is broad, and the service is efficient.