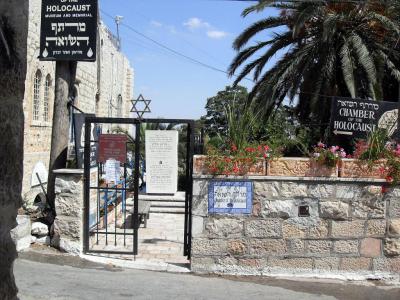 Chamber of the Holocaust, Jerusalem

Among the lesser-known sites on Mount Zion, this small memorial once acted as Israel's first Holocaust museum, pre-dating the larger Yad Vashem museum by at least four years. A six-room cellar located beside a tomb some believe to be the burial place of the biblical King David, it was established in 1949 by early settlers who came to Israel as refugees, anxious to see that their previous lives would be remembered.

Once you've made your way to the small desk at the entrance, a minimal fee permits you to wander through the several small rooms and a courtyard. There are seldom many other visitors and one is thus left alone for quiet contemplation. With a bit of signage and a dramatic display of finds (mostly of Jewish religious context), one gets a sense of the mood that was being aimed for. Sometimes referred to as "a cemetery without bodies", it has headstones without graves, monuments without remains and tombstones for family members who had no real tomb to visit. In this very tangible and affecting way, the full scope of the Holocaust is brought home.

Exiting into the daylight once again reminds of the contrast of present-day Israel and the past.