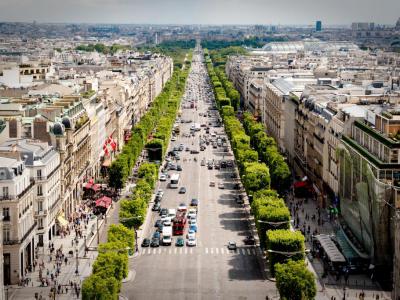 By far the most popular avenue of France, Les Champs-Élysées, or the "Elysian Fields", is a household name deeply rooted in the Greek mythology as a resting place for the blessed souls. Stretching for about 2 km, this major Paris thoroughfare extends from Place de la Concorde to Place Charles de Gaulle, boasting, apart from the exuberant shopping, luxurious dining and world-class entertainment, some of the top photographic panoramas of the French capital, particularly that opening from the top of the Arch of Triumph.

At one end, Champs-Élysées is straddled by a patch of greenery, surrounded by landmark attractions such as the Grand Palace and the Small Palace, housing a bunch of art galleries. Once a year, on the Bastille Day, the avenue hosts a military parade, as well as sees the finish of the annual Tour de France cycling race.

As a staple destination for foodies, it offers a choice of gourmet eateries fit to spoil even the most discerning gluttons. Among the places particularly worth checking out here are: bistro “Atelier Renault”; Flora Danica – renowned for its caviar; Fouquet’s restaurant aged over 100 years; the famous Laduree tea room; as well as L’Alsace Bistro specializing, just as the name suggests, in the cuisine from the Alsace region of France, open 24 hours a day.

Those craving entertainment will find it here in equally rich supply. Cinema Gaumont, France's #1 screen for movie premiers, the world famous cabaret Lido, the bar and club Montecristo, Le Queen nightclub with some of the top DJs in town, plus the Marigny Theatre are just some of the options to consider.

Why You Should Visit:
Whatever the season, day or night, Champs-Élysées never fails to impress.
Still, if you come here around Christmas, you'll be in for a special treat!
Image Courtesy of Wikimedia and Josh Hallett.