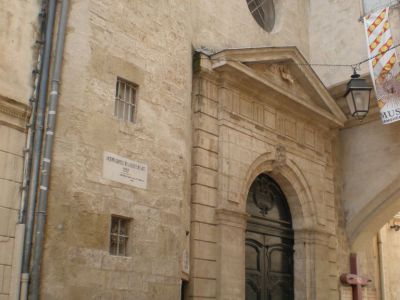 Chapel of the White Penitents, Montpellier

Chapel of the White Penitents is another religious building which doesn't have its doors open to people all the time, but this does not present an impediment to admiring its external beauty. Until the sixteenth century, the facade of the chapel belonged to the church of Saint Foy, until it was almost entirely demolished. In 1624, the chapel was reconstructed. It now gets open very rarely, offering the amazing sight of its interior - beautiful old paintings and colourful stained glass. It has a sleek facade, characteristic of the thirteenth century, and is decorated with three stripes and a beautiful classical portal. There are very nice acoustics, and the ceiling painted gilt decoration has given it its nickname - the Sistine Languedoc.
Image by Vpe on Wikimedia under Creative Commons License.

This sight is featured in a self-guided walking tour of Montpellier, France within the mobile app "GPSmyCity: Walks in 1K+ Cities" which can be downloaded from iTunes App Store or Google Play. Please download the app to your mobile phone or tablet for travel directions for visiting this sight. The app turns your mobile device to a personal tour guide and it works offline, so no data plan is needed when traveling abroad.

Montpellier is a city with numerous attractions for children of all ages and their parents. The young ones will be happy to savour a delicious ice cream in Cocco e Fragola, watch an entertaining performance in the Théâtre de la Plume and pick a nice toy to take back home from the Pomme de Reinette and Pomme d'Api shop. The kids who are a bit older will enjoy climbing the Water Castle,...  view more