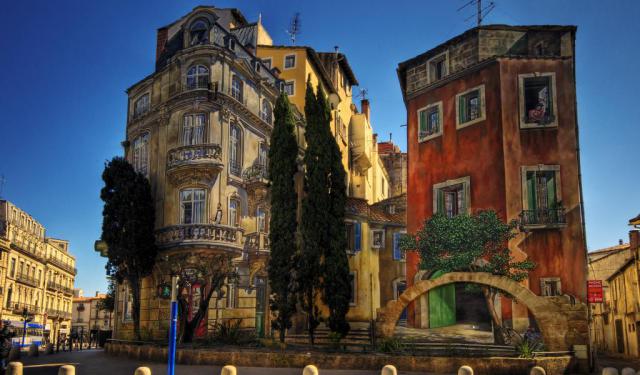 The staggering variety of street art in Montpellier makes it a major scene for artistic expression in urban setting, where old and new (from the early 20th to the 21st centuries), amateur and professional creations complement each other beautifully. Despite a century separating some of the murals, stencils and grafittis, their objectives – to make a statement, to delight people, and also (as of lately) to make them raise their head from their smartphones – is the same.

In recent years, many more interesting pieces have sprung up throughout the city. Some of the coolest ones are found in the old town as well as the adjacent Rondelet district (here the street artist Mist enlivens the façade of a house, at Place Rondelet) and the Saint Roch neighborhood, where a large trompe-l’oeil (French: “deceive the eye”) mural, opposite the Saint Roch Church, depicts a reflection of the church and a “fake” building façade.

Alongside graffiti, other, real-life objects have also been used to decorate Montpellier’s walls, making it even more exciting. Several “half-bikes” stuck into the narrow medieval walls – created by locally-born Monsieur BMX – quite fit in with the ancient architecture, as if part of the original décor, but also highlight the importance of bikes in this bike-friendly city.

If you’re visiting Montpellier for the first time, make sure to check out the local street art, which is a true delight to discover! Take this self-guided walking tour venturing into the old town and further afield to encounter the city’s most iconic buildings and facades adorned by well-known street artists.
Image Courtesy of Flickr and Wolfgang Staudt.
How it works: Download the app "GPSmyCity: Walks in 1K+ Cities" from iTunes App Store or Google Play to your mobile phone or tablet. The app turns your mobile device into a personal tour guide and its built-in GPS navigation functions guide you from one tour stop to next. The app works offline, so no data plan is needed when traveling abroad.

At first glance, the mural at Saint Roch Square may not seem like a mural at all. The Trompe-l'oeil technique used deceives the eye to create the appearance of realism in what is actually a fresco. This mural shows a reflection of the Saint Roch Church along with the facade of a cafe.

With so many cafes and terraces in the neighborhood, the mural artfully copies everyday life near Saint Roch Church. The optical illusion of the mural makes it appear three dimensional. This mural was created by Agnes and Olivier Costa. Their team, Mad'Art Concept, used a 300-square-meter wall with only one window to break up the blank space as their canvas.

Along with the cafe and the reflection of the church, the Costas referenced the history of Montpellier by including the shells of Saint-Jacques de Compostelle, an image of a dog with bread in its mouth and a medicine jar.

Image Courtesy of Wikimedia and Chabe01.
2

Monsieur BMX has placed half-bikes throughout Montpellier. These bikes are stuck on walls throughout the city, making for a scavenger hunt-esque experience while finding each of the bikes.

Tourists will find one of these pieces on Rue du Clos Rene on the Hotel de la Metropole. Another is at the Montpellier Méditerranée Métropole on Rue Leon Blum. A third can be found at the corner of Avenue Saint-André de Novigens and Avenue de Saint-Maur.

Visitors to Montpellier should keep their eyes peeled for the half bikes. They pop up when they are least expected. Monsieur BMX has also begun placing shopping carts as art installations around cities in order to encourage people to leave items for those in need.

The artist known as Monsieur BMX started his half bike artwork in Montpellier and has since expanded to Paris, Brussels and New York. Enjoy seeing the inspiration for the world-wide art installations on your trip of Montpellier.

Image Courtesy of Free for commercial use Attribution not required.
3

The Mural at Edouard Adam Square is arguably the most famous example of Trompe-l'oeil in Montpellier. It was created by the team behind Mad'Art Concept, Agnes and Olivier Costa.

The entire mural was created over the course of two months. From November through December of 2005, the Costas transformed the building in Edouard Adam Square into an optical illusion. Though the building has a flat facade, it now appears to be Haussmannian buildings with window balconies, an arched walkway and open doors and windows.

Don't be confused between the two-dimensional people in the buildings and those sitting at the covered tables. La Trattoria is an actual restaurant with Italian dishes like lasagnas, pastas and pizzas. There are also some French favorites such as pate au choix and cheese plates.

Next door to La Trattoria is the Pharmacie de l'Observatoire. You can walk into the mural-covered building to find medicines and over-the-counter items like toothpaste and shampoos.
Image Courtesy of Wikimedia and Rodrigo.Argenton.
4

The Mural at Place Saint Denis is a Trompe-l'oeil piece on the flat side of a private technical school, Ecole Technique Privée DUCLAUX. The school is located behind the Church Saint-Denis of Montpellier.

The mural is best viewed from the street level of Av. Georges Clemenceau. However, when viewed from a distance, it truly appears to have a three-dimensional face like those in its vicinity. The mural shows open windows, balconies and faux-stained glass along with painted reliefs and rosettes.

This mural is just one of the many Trompe-l'oeil works throughout Montpellier. However, the almost hidden nature of the mural gives it a more realistic appearance.
Image Courtesy of Flickr and youcandoit.
5

The Mist Mural at Place Rondelet is so-called because it was created by the street artist, Mist. Mist spent two days creating the 200 square-meter mural. He is known for his abstract images, but this massive mural showcases his work on a much larger scale.

The mural was arranged by Gallery At Down to function as a type of advertisement for Mist's solo show at the gallery in 2014. It has since become one of many murals that paint the city of Montpellier.

The mural at Place Rondelet is located on the side of a commercial building that houses a salon, various boutiques and services. Jutting through the parking area of the large post office, the mural is both easily viewed and accessed for photos.

Mist is the street name of artist Guillaume Lemarquier. In addition to the artwork that he creates out of his studio in Montpellier, he is known as a toy designer.
Image Courtesy of Wikimedia and Daniel Lepoittevin.