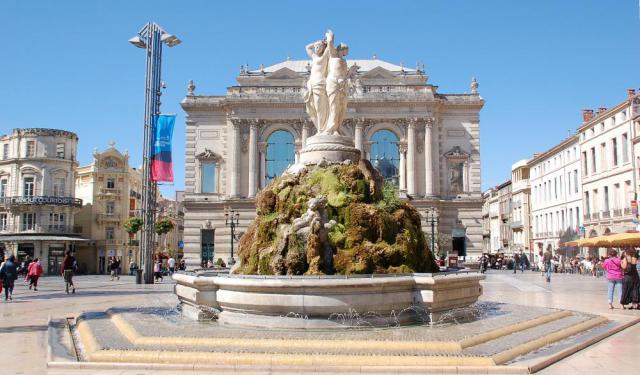 Image by Syndhie on Wikimedia under Creative Commons License.

Montpellier is a very attractive city from an architectural standpoint. Some of the local structures are extremely old, this being an inviting factor for history buffs. Among the ancient landmarks worth visiting here are the Tower of Babotte, the Opera House and more. Those with the taste for modernity will certainly love to explore the local buildings facade frescoes - a new course in contemporary art.
How it works: Download the app "GPSmyCity: Walks in 1K+ Cities" from iTunes App Store or Google Play to your mobile phone or tablet. The app turns your mobile device into a personal tour guide and its built-in GPS navigation functions guide you from one tour stop to next. The app works offline, so no data plan is needed when traveling abroad.

The Place de la Comédie is the main focal point of the city of Montpellier, in the Hérault department in southern France. The square is first mentioned in 1755 and is named after the theatre located there, which burned down in 1785 and 1855. The Place became the main focal point of the city when, in the mid-19th century, the main railway station was built some 200 metres south of it. At the center of the square is a fountain called the Three Graces, built by sculptor Étienne d'Antoine in 1790. The original piece was placed in the Musée Fabre in 1989, but moved again during the refurbishment of the museum to the Opéra Comédie, which is located at the square. At its northeastern corner, the square continues into the Esplanade de Charles de Gaulle, a small park connecting the Place to the Corum, a large concrete and granite complex built by Claude Vasconi. At its southeastern corner it is linked to the Lycée Joffre, formerly the Citadel of Montpellier.
Image by Wolfgang Staudt on Flickr under Creative Commons License.
Sight description based on wikipedia
2

The Opera House was inaugurated in 1888. Fires and wars damaged the construction many times. During the Revolution, it was used as a venue for different political events. The present building of the Opera House is the work of four talented architects, the so called "four musketeers" - Avinaud, Jullian, Coste and Baussan. Many other famous sculptors, architects and other masters worked on the building that is one of the main architectural monuments in Montpellier today.
Image by Fritz Geller-Grimm on Wikimedia under Creative Commons License.
3

3) Chapel of the Blue Penitents

The Tower of Babotte is located in the center of Montpellier. Its height is twenty six meters. The tower was built in Medieval times, along with other towers that surrounded the city. Nowadays only the present one and one more remain intact. In the eighteenth century, when a solar eclipse was to take place, the tower was transformed into an observational site. It now serves as a meeting place for astronomers.
Image by Sebjarod on Wikimedia under Creative Commons License.
5

The mural at Place Edouard Adam is the biggest fresco of this kind in Montpellier. It was painted by Olivier and Agnès Costa, popular and talented artist who worked in this area. The present fresco depicts trees and balconies, as well as people looking out of the windows. It is one of the most realistic works of its kind.
Image by Christophe.Finot on Wikimedia under Creative Commons License.
6

The mural at Place Saint Roch is one of the four "fresques" (frescoes) that decorate the city. The present one faces the Saint Roch Church. It covers an area of three hundred square meters. It represents a facade of a house and people chatting on the front stairs.
Image by jean-louis zimmermann on Flickr under Creative Commons License.
7

Image by Philipp Hertzog on Wikimedia under Creative Commons License.
8

The Prefecture of Hérault is an enormous construction built in the nineteenth century. It is occupied by various administrative offices, and is decorated with many beautiful architectural elements and ornamental Corinthian columns. A big clock surrounded by sculptures of females is installed above the entrance of the Prefecture. There is also a statue of a woman holding weapons of Montpellier in her left hand and a vase pouring water in her right.
Image by Sebjarod on Wikimedia under Creative Commons License.
9

The Palace of Justice is a significant building reflecting the city's history. It was built in the nineteenth century. Its construction was finished in 1853, but the site has a much longer history, dating back to the 12th century, when Guilhem VI built his palace here. The present building of the Palace of Justice is designed in Neo-classical architectural style. The facade of the palace is decorated with Corinthian columns.
Image by Vpe on Wikimedia under Creative Commons License.
10

Montpellier Cathedral (Cathédrale Saint-Pierre de Montpellier) is a Roman Catholic cathedral and a national monument of France, located in the town of Montpellier. It is the seat of the archbishops, previously the bishops, of Montpellier. Originally attached to the monastery of Saint-Benoît (founded in 1364), the church was elevated to the status of cathedral in 1536, when the sea of Maguelonne became part of Montpellier. It suffered extensive damage during the Wars of Religion between Catholics and Protestants in the 16th century, and was subsequently rebuilt in the 17th century.
Image by Wolfgang Staudt on Flickr under Creative Commons License.
Sight description based on wikipedia
11

The Ursulines was built in 1641. Its design was realized by architect Jean Bonnassier. The initial function of the building was to shelter a nunnery which was transformed into a women's prison during the Revolution. For several years after that, the place became an assemblage of barracks. Nowadays the building has the role of hosting a dance studio and several offices linked to Montpellier Dance. Numerous choreographic events take place in the Ursulines.
Image by Vpe on Wikimedia under Creative Commons License.
12

The Jardin des Plantes de Montpellier (4.5 hectares) is a historic botanical garden and arboretum. The garden was established in 1593 by a letters patent from King Henri IV, under the leadership of Pierre Richer de Belleval, professor of botany and anatomy. It is France's oldest botanical garden, inspired by the Orto botanico di Padova (1545). In turn, it serves as a model for the Jardin des Plantes de Paris (1626). The Montagne de Richer lies within the garden's oldest section, which now contains a systematic garden. The garden was expanded twice in the nineteenth century. Its orangery was designed by Claude-Mathieu Delagardette and completed in 1804; the arboretum was landscaped in 1810, and the English Garden, with pool and greenhouse, dates from 1859. The monumental Martins greenhouse opened in 1860. Today the garden contains about 2,680 plant species, 500 of which are native to the Mediterranean region. Of these, roughly 2,000 species are grown outdoors and 1,000 under glass.
Image by xfce on Flickr under Creative Commons License.
Sight description based on wikipedia
13

The Montpellier Aqueduct - Les Arceaux - is one of the most notorious city landmarks. The arcade was built in the 17th century to supply the wells of the growing city of Montpellier with water from the spring of St. Clement, which is actually about 14 km away. The Aqueduct measures 880 meters, with 53 arcades built in two levels, using the old traditions of Roman times. The outer base of the archway carries water up to 3 meters wide, while the interior contains several water tubes covered with lead to avoid freezing. It was inaugurated on the 7th of December, 1765. Every Sunday the Aqueduct base hosts the "Les Arceaux" green and flea market.
Image by satemkemet on Flickr under Creative Commons License.
14

The Water Castle is a catchment basin designed as a monument. It is located in the Peyrou park. The Water Castle was built in 1768 by Jean-Antoine Giral. The monument is fed by a 14-kilometre aqueduct. The construction, though reminiscent of a triumphal arc, has a hexagonal form and is adorned with Corinthian columns. The most fun thing about the Water Castle is that admirers can climb to the top and enjoy the perfect panorama of the city, as well as the Cévennes Mountains.
Image by Vincent Ramos on Wikimedia under Creative Commons License.