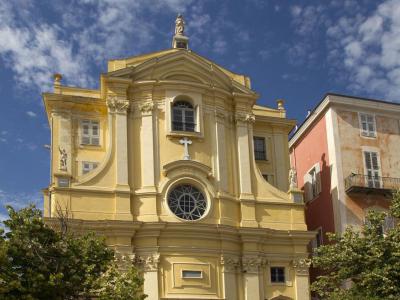 To fully appreciate the beauty of the churches of Nice, you will also want to look at some of the lovely chapels built in the city. The Chapelle de la Misericorde is a beautiful example of old town architecture. It is located along the Promenade des Anglais. You will need to travel down to the Quai des Etats-Unis to find it.

The building has been owned by the Brotherhood of Black Penitents for many years. The Order dates all the way back to the 1400s, and are still a prominent such religious group within the Roman Catholic Church.

This chapel sets where the old Theatins had their first chapel in 1674. At the time, it was called the Chapel of St. Gaetan. The current structure was not worked on in earnest until the 1700s, when it formal construction began. The Brotherhood purchased the location in 1828, and has owned it since that time.

It is a classic example of Italian Baroque art. One of the most striking things about the design is how light and dark play against each other in the building, accentuating some of the religious symbols in the building. The altars in the chapel also date back to the 1400s, so you will want to see them on your visit.
Image by Anders_3 on Flickr under Creative Commons License.
Sight description based on wikipedia

Nice, an iconic destination in Southern France, has been the lure for the rich and famous for centuries thanks to its temperate Mediterranean climate and picturesque seafront. Other than chic boutiques, hotels and restaurants, the city is famed for its historic attractions, such as the Promenade des Anglais ("Promenade of the English"), 19th century Opéra de Nice, Château, Cours...  view more

Nice is a beautiful city with large streets, a beautiful atmosphere, beautiful places, important historical sites, monuments and buildings. It is a great place to shop. In nearly every region of the city are streets with large zones dedicated to markets and shops with everything from clothes and books, to food and souvenirs. Take the following tour to discover the most beautiful places for...  view more

Nice is a very interesting city with activities for all ages and tastes. There are museums, galleries, historical buildings and theaters for people who love art in all its forms. For younger crowds there are clubs, pubs, bars and parks. There are also places for families that parents and children can enjoy. Take the following tour to discover the most popular attractions for kids.