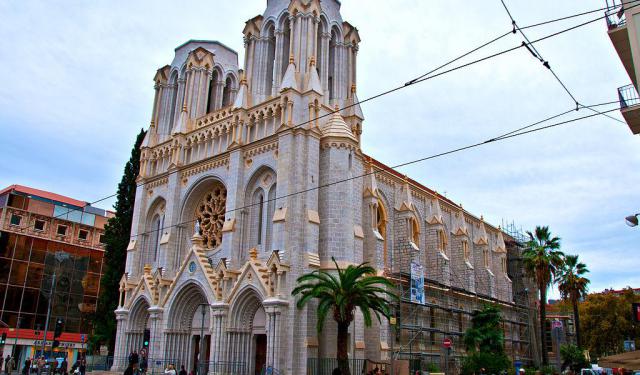 Centuries of somewhat turbulent history have left imprint on the face of Old Nice, which until the 18th century represented the entire urban area. The abundance of historic and often colorful churches – about nine per square mile – ranging from the most opulent to the most obscure, each with its own quirks and story behind their stained glass, has made Old Nice part of a heritage preservation scheme.

Alongside Catholic temples – Catholicism is the main religion in France – there are plenty of other churches of various denominations in town, such as Orthodox, Anglican, Baptist, Evangelistic, Protestant and more. Here are some of them you may not want to miss:

Cathédrale Saint-Nicolas – the Russian Orthodox Cathedral in Nice, property of the Russian Federation and a national monument of France; the largest Eastern Orthodox church in Western Europe.

Basilique Notre-Dame – the largest church in the city; also one of the main Old Town attractions, designed in an Italian Baroque manner.

Cathédrale Sainte-Réparate (Saint Reparate Cathedral) – rebuilt into a Cathedral in the 17th century from a small church, St Mary of the Castle, of circa 1049; named after a pious Palestinian teen, Reparate, martyred for her Christian faith.

Chapelle de la Misericorde – a beautiful example of ancient architecture; originally owned (from the 1400s) by the Brotherhood of Black Penitents, a prominent religious group within the Roman Catholic Church.

If you are a fervent believer or simply enthusiastic architecture buff seeking to have a truly cultural day of exciting exploration in Nice, take this self-guided walking tour and discover some of the top historic churches in town.
Image Courtesy of Wikimedia and LimeWave Photo.
How it works: Download the app "GPSmyCity: Walks in 1K+ Cities" from iTunes App Store or Google Play to your mobile phone or tablet. The app turns your mobile device into a personal tour guide and its built-in GPS navigation functions guide you from one tour stop to next. The app works offline, so no data plan is needed when traveling abroad.

The Cathedrale Saint-Nicolas, an Eastern Orthodox cathedral in Nice, is a possession of the Russian Federation. Nevertheless, it is also a national monument of France. It is in the Moscow Patriarchate and it's the largest Eastern Orthodox church in Western Europe. In 1864 Tsar Alexander II took the first train to Nice and fell in love with the climate.

Since the visit of Alexander II the Riviera has been very popular with the Russians. The Cathedral was consecrated in 1912 in memory of Tsarevich Nicholas Alexandrovich, who had died in Nice. Funding for the Cathedral was provided by Tsar Nicholas II of unhappy memory. In 2013 the Court of Cassation ruled the building and land to be Russian.

Although the Cathedral is located in Nice, one glance at the exterior would give it away. It is Russian, inside and out. No other architecture in Nice approaches it. It makes one think of a Fabrage egg. The onion-shaped domes and bright colors, the vast collection of icons leave no doubt.

Admission to sightseers is free but no photographs inside are allowed and telephones should be turned off. There is a dress code for those who wish to go inside. Men must not wear shorts. Women may not show bare shoulders and heads should be covered.

Image Courtesy of Wikimedia and Joseolgon.
2

The Notre Dame Church of Nice is the largest of the churches located in the city. It is also one of the main Old Town attractions, representing the first of the churches built in the area in a more modern architectural style. You can find the building on Avenue Jean Medecin, in the very heart of that part of Nice.

By far, most of the religious buildings in Nice have been designed in an Italian Baroque manner. So, in 1848, when the Basiliquee Notre-Dame was built, its very Gothic style represented something totally new. The design was created by the well known architect C. Lenormand. The style lends an old and majestic kind of look to this house of worship that transcends the building's actual age.

The Avenue Jean Medecin is a very busy street in old Nice; therefore, it shouldn't be too difficult for anyone to find things to do along its whole length, making a stop at the famous church a must-do for your trip.

Why You Should Visit:
The architecture is impressive, especially when the exterior is lit up at night and reflects in the glass windows next door and across the street. Serene, with beautiful rose windows and stained glass on the inside, it offers a peaceful escape from the hustle and bustle of downtown Nice.

The Saint Reparate Cathedral is one of the most interesting and beautiful cathedrals in Nice. It sits on the site of a small church called called St Mary of the Castle that dates back circa 1049. The current structure was built in the middle 17th century, and dedicated in 1699. The building is magnificent and contains 10 chapels maintained by private families, and three organs.

The name comes from a young Palestinian boy who was martyred for his Christian faith. Saint Reparate was 15 when he was beheaded and his body set adrift in a small vessel. According to legend, the boat floated up to the shores of Nice and he is now buried at the cathedral.

There have been additions over the years; the Baroque facade was added in the early 1800s. This hides the original cupola which is still there, but a bit hard to see. However, the cupola is covered in colored tiles and is beautiful standing guard over the transept.

The inside also carries on the Baroque theme with plentiful use of marble and gold. The barrel ceilings only add to the huge splendor of the cathedral which is built in the style of the Latin cross. This is definitely a must see when in Nice.

To fully appreciate the beauty of the churches of Nice, you will also want to look at some of the lovely chapels built in the city. The Chapelle de la Misericorde is a beautiful example of old town architecture. It is located along the Promenade des Anglais. You will need to travel down to the Quai des Etats-Unis to find it.

The building has been owned by the Brotherhood of Black Penitents for many years. The Order dates all the way back to the 1400s, and are still a prominent such religious group within the Roman Catholic Church.

This chapel sets where the old Theatins had their first chapel in 1674. At the time, it was called the Chapel of St. Gaetan. The current structure was not worked on in earnest until the 1700s, when it formal construction began. The Brotherhood purchased the location in 1828, and has owned it since that time.

It is a classic example of Italian Baroque art. One of the most striking things about the design is how light and dark play against each other in the building, accentuating some of the religious symbols in the building. The altars in the chapel also date back to the 1400s, so you will want to see them on your visit.
Image Courtesy of Wikimedia and trolvag.
Sight description based on Wikipedia.
5

This is a beautiful old church that can be found on the northern end of the Old City part of Nice. It is often overlooked as a tourist attraction, probably because of it location at the edges of the historical part of town.

The house of worship was constructed in 1837. It is a classic example of Italian Baroque architecture, which was quite the rage of the time of the building of the site. On the site, you will want to see the Pieta that was done around the 15th Century. It was designed by Louis Brea. He is also well known for his work on the Monetary owned by Franciscans, called Cimiez. The work is done in the Italian Renaissance tradition, and is quite stunning to say the least.

One of the other things that you will want to know about this old church is that it has hardly changed since its last renovation in the 1800s. It is not often that you can still view a church in Europe that has not undergone some type of modern redesign for construction for the sake of preservation.
Image Courtesy of Wikimedia and Patrice Semeria.