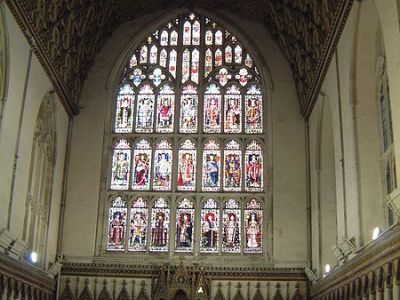 The Chapter House and the Cloisters are situated on the north side of the Canterbury Cathedral. This magnificent chamber inside a separate building is the largest chapter house in England. The Chapter House was built in the late 14th century. The central zone of the chapter house is an open space. The Chamber House interior features the wonderful Medieval stained glass, lofty timber roof, and stone seats ring the walls under arched stone niches and Prior’s noble seat. It was the meeting place for monks and priests who represented the council and prayed. Later, sermons were preached here. It's worth trying to get inside.
Image Courtesy of Wikimedia and ABrocke.