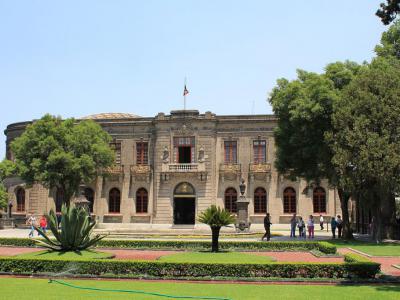 Commanding spectacular views of Mexico City, this castle is the only structure to have served as a seat of a sovereign in North America. The building stands majestically on Chapultepec Hill and now houses the National Museum of History.

The Castillo de Chapultepec was built for the then Spanish viceroy, Bernardo de Galvez in 1725. The building was purchased by the city of Mexico in 1806. In 1833, the castle became a military academy and a tower called the Caballero Alto (Tall Knight) was added to the existing structure. In 1847, boy heroes aged between 14 and 20 died defending the castle when US troops laid siege. They were later honored by a mural in the ceiling at the entrance of the castle. In 1864, Emperor Maximilian I and his Empress Carlota of Mexico chose the building as their residence and extensive changes were made to the architecture and landscape to make it a palace, fit for a king. In 1882, Porfirio Diaz converted the castle as the official residence of the Mexican President.

In 1939, the castle ceased to be the residence of the President and was open to visitors as the National Museum of History. The museum is arranged in chronological order and one can see exhibits from the Aztec Empire until the 1930s.

Why You Should Visit:
The only Imperial castle in America! Very cheaply priced and with a beautiful view of the Reforma Avenue which was originally modeled after the Champs-Élysées in Paris to remind Maximilian's wife, Carlota, of her home. The surrounding area of Chapultepec Park boasts a Zoo and many other attractions to complete the day.

Tip:
Try to see when the ballet folklórico is performing because to see their show after the museum closes is a great experience!
At the top, you can go to the right to see the Caracol History Museum (made in the shape of a shell) which has some informative dioramas explaining the very complex history of Mexico.