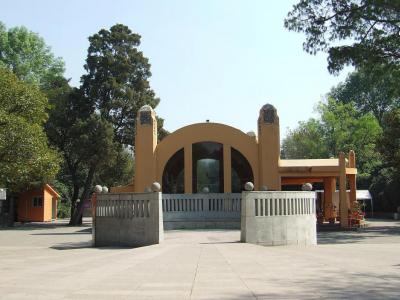 Occupying 17 hectares of the first section of Chapultepec Park in Mexico City is the Parque Zoologico de Chapultepec. The zoo is the most visited in Mexico and attracts over 5 million visitors every year. It was conceived and created by noted Mexican biologist Alfonso Luis Herrera.

The design of the Parque Zoologico de Chapultepec was based on the Bioparco Roma Zoo in Italy. The foundations for the zoo were laid in 1923. The location was once the game reserve of the Aztec emperor Moctezuma. Alfonso Luis Herrera visited zoological parks around the world before creating the institution. Species on view include birds, mammals, and reptiles. The area spans 17 acres with separate sections for different climatic conditions and vegetation. The butterfly park has over 40 species of butterflies, native to Mexico. In 1972 the Peoples Republic of China gifted two giant pandas to the zoo. Native species include the volcano rabbit, the Mexican wolf, the howler monkey, and the Jaguar. The Parque Zoologico de Chapultepec has an onsite laboratory for reproductive physiology to enable reproduction of non-native species in captivity by natural or artificial means.

Admission to the Parque Zoologico de Chapultepec is free and the park remains open for visitors, Tuesdays through Sundays.

Why You Should Visit:
Lots of cool animals and the layout makes it easy to do sections or the whole zoo.
There are many trees and shady areas, so you won't feel beaten by the sun even on a warm day.
The zoo also has a food court with everything from McDonald's, Chinese, Mexican and Domino's Pizza.

Tip:
It is best to go in the morning when animals are most active and the heat is not an issue.
The butterfly enclosure is not free, but reasonably priced, and worth the walkthrough.
Spend a few extra pesos and take a paddleboat out on the lake, too!