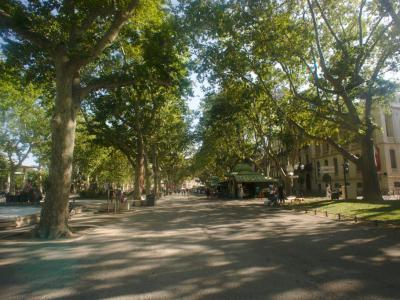 It was after the siege of Montpellier in 1622 that Louis XIII ordered some ramparts demolished to improve sight lines for the artillery pieces in the Citadel.

By 1679 the bastions and walls had been taken down around the common area and the deep moat by the Gate of Lattes was filled in. Later a military drill field was created for the soldiers based in the neighboring fort, the Citadel.

The military drill field was sold by the army to the town and transformed into an esplanade in 1900. There emerged fountains, numbers of statues and a monument to All The Dead of All the Wars. At first the monument was close to the Corum Palace, home of Opera Belioz. An inscription on the cornice reads, "Montpellier to her children dead for France."

The Esplanade is really an extension of the Comedy Square. It holds the Garden of the Fields of Mars, fountains, the Fabre Museum, the Museum of France, the Corum, a statue of Jean-Jaures, a bust of General de Gaulle, and kiosks of food.
Image Courtesy of Wikimedia and Inkey.