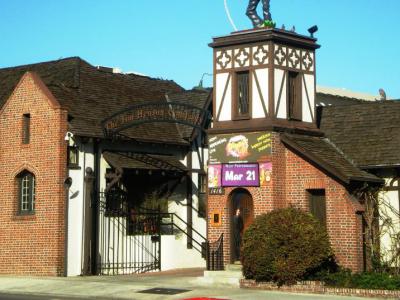 When you pass the Jim Henson Studios (former Charlie Chaplin Studios) on La Brea Avenue, you would be excused if you thought that you were on the film-set of an English village.

Charlie Chaplin bought the vast tract of land that had once been an orange grove, in 1917, and built there his studios. The screening rooms, offices and film laboratory were housed in charming English-style cottages. The studios themselves included the back lot with its outdoor sets, twin open-air stages, carpenter’s shed, garages, film vault and dressing rooms.

On the north end of the land Charlie Chaplin built a lovely house which he intended for his own use, although he never lived there in the end and rented it out to various friends. The house had adjoining stables, a swimming pool and tennis courts. He eventually sold the house and surrounding land, and the buildings were demolished in 1942 to give way to a new shopping centre.

Before selling the studios in 1953, Charlie Chaplin turned some of his best films here, including “The Kid”, “The Gold Rush”, “The Great Dictator” and “Modern Times”. Sadly, America was soon to be deprived of its beloved “little Tramp with a Heart of Gold”: during the dark years of the McCarthy Era many Hollywood stars suffered greatly for their mild communist leanings. Charlie Chaplin was considered to be a “Pinko” for his left wing views and when he went to England in 1952 for a short holiday, Hoover, the director of the FBI, had his right to re-enter the United States revoked, and Chaplin settled in Switzerland.

He sold the studios in 1953 to a television company. In 1959, Red Skelton bought the studios and sold them to CBS in 1962. Since 2000 the studios have been the home of the Jim Henson Company and his delightful Muppets.

Charlie Chaplin returned once to the United States. In 1972, he came back with his wife to receive an Honorary Oscar, but he refused to visit his old studios, saying the memory was “too painful”.
Image by Cbl62 on Wikimedia under Creative Commons License.