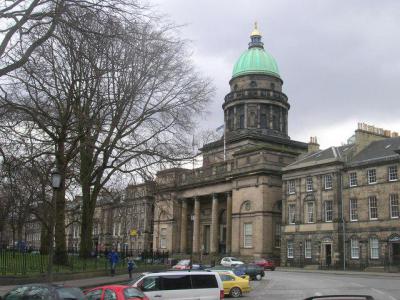 Marking the west end of George Street, Charlotte Square was constructed as a complement to St Andrew Square that is found on the opposite – east – end of the same street.

The square was named after King George III’s first daughter. Its construction began in 1820 and the last part of it, the north-west corner, was completed only in the 1990s, with the original plan duly adhered to, so there is nothing in its appearance suggesting a modern look.

The Number 5 house on the north side of the square is the former residence of John-Crichton-Stuart. Upon his death, the property was bequeathed to the National Trust of Scotland, and today it accommodates the Edinburgh World Heritage Trust headquarters.

In the square’s gardens there is a fine equestrian memorial statue of Prince Albert, Queen Victoria’s husband, erected by Sir John Steell. The gardens are open only to the local residents though, except in August, when for three weeks it hosts the Edinburgh International Book Festival.
Image Courtesy of Wikimedia and R Sones.