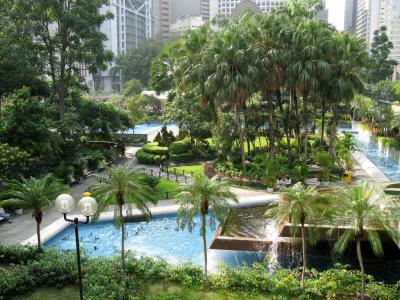 Surrounded by famous structures and places such as the Bank of China Tower, the Legislative Council Building and situated to the south of the Hong Kong Planning and Infrastructure Gallery, Chater Garden is one of the easiest sites to find in the Central area. It is named after Sir Paul Chater, and one side of the garden is on Chater Road which is also named after him. It is the perfect choice to rest and admire its arranged pools, waterfalls and fountains, as well as well-maintained and manicured bushes. It is often used for holding political rallies and demonstrations by several community groups. Chater Garden took up space left by the Hong Kong Cricket Club, which was located there from 1851 to 1975, and which moved to Wong Nai Chung Gap. The garden was developed in the 1970s, and was formally opened on October 10, 1978.
Image by Baycrest on Wikimedia under Creative Commons License.
Sight description based on wikipedia