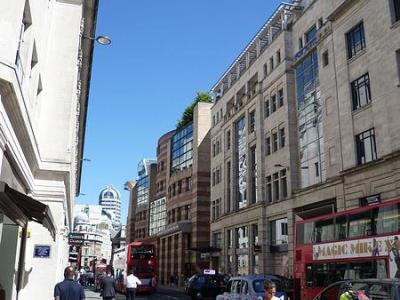 Back in the 19th century, Cheapside was an enormously popular shopping district. It figures throughout the history of English literature and makes numerous appearances in Dickens’s writing. In "Great Expectations", Pip described the adjacent street market of Cheapside as "all asmear with filth and fat and blood ... the great black dome of St Paul's bulging at me."

Charles Dickens, Jr. wrote in his 1879 book Dickens's Dictionary of London: "Cheapside remains now what it was five centuries ago, the greatest thoroughfare in the City of London. Other localities have had their day, have risen, become fashionable, and have sunk into obscurity and neglect, but Cheapside has maintained its place, and may boast of being the busiest thoroughfare in the world, with the sole exception perhaps of London-bridge."

Today, Cheapside is still a busy retail destination widely known for the wide range of outlets and offices, as well as the City's only major shopping centre, One New Change, at the St Paul's end.
Image Courtesy of Wikimedia and Philafrenzy.