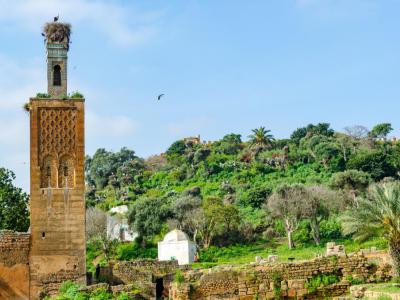 The site was abandoned in 1154 in favour of nearby Salé. The Almohad dynasty used the ghost town as a necropolis. In the mid-14th century, a Merinid sultan, Abu l-Hasan, built monuments and the main gate, dated to 1339. These later Merinid additions included a mosque, a zawiya, and royal tombs, including that of Abu l-Hasan. Many structures in Chellah were damaged by the 1755 Lisbon earthquake. The site has been converted to a garden and tourist venue.
Image Courtesy of Flickr and Andrzej Wójtowicz.
Sight description based on Wikipedia.

Want to visit this sight? Check out these Self-Guided Walking Tours in Rabat. Alternatively, you can download the mobile app "GPSmyCity: Walks in 1K+ Cities" from iTunes App Store or Google Play. The app turns your mobile device to a personal tour guide and it works offline, so no data plan is needed when traveling abroad.

Morocco's capital Rabat is known for its picturesque natural surroundings as well as man-made beauty manifested in a combination of old and new architecture, featuring Islamic and French-colonial styles, abundance of mosques and historic monuments. One of the city's most prominent sights is the iconic Hassan Tower, a 12th-century minaret, soaring over the ruins of a mosque. Follow this...  view more