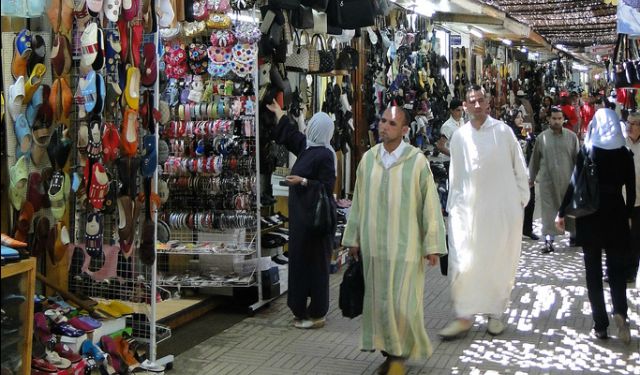 Rabat is heaven for those who love shopping. The city offers many shopping opportunities with traditional markets or shopping streets. All kinds of clothes, shoes, leather, jewelry, pottery, handicrafts, carpets, rugs and many other oriental items can be found here. Take this self-guided walk to see the popular markets and shopping streets in Rabat.
Image Courtesy of Flickr and Adam Jones, Ph.D..
How it works: Download the app "GPSmyCity: Walks in 1K+ Cities" from iTunes App Store or Google Play to your mobile phone or tablet. The app turns your mobile device into a personal tour guide and its built-in GPS navigation functions guide you from one tour stop to next. The app works offline, so no data plan is needed when traveling abroad.

rue des Consuls (Street of the Consuls) is one of the oldest and most famous streets in Rabat, classified as a historic monument. Indeed, the history of this area goes back 500 years. In 1609, King Philip III of Spain expelled all the Moriscos (people of Muslim or Moorish descent) from the country, a good number of whom (up to 14,000) settled in Rabat and neighboring Salé, in 1627. The autonomous Corsair Republic of Salé that they formed became a base for corsairs (pirates), who preyed on merchant ships around the shores of Western Europe. Back then, the area below the Kasbah, on the south bank, grew heavily populated, and the territory of today's Rue des Consuls became an important road artery.

It was during that time that the first ambassadors came here to negotiate the release of prisoners kept by the pirates. The most famous of them, perhaps, was Louis Chénier, father of the French poet André Chénier, who served here for from 1768 to 1782, representing King of France.

Pursuant to a treaty signed with the Sultan, foreign diplomats were allowed to buy back their compatriots from the pirate captivity at the Souk El Ghazal in the special "negotiation zone". Owing to this, for centuries, first during the Republic of Salé and then under the Chérifien Empire, up until 1912, this neighborhood had been a home to numerous ambassadors and consuls, particularly European ones. Today, it still houses residences of the Swedish, Danish and Dutch envoys.

Also, rue des Consuls is a home to the landmark craft souk renowned for the traditional carpets, rugs, jewelry, leather, silks, lamps, wooden furniture and of course the traditional babouches (loose garments) and jellabahs (slippers) sold here in abundance and attracting many tourists. Here, alongside handmade tagine pottery and other authentic stuff, you can also find dried fruits and various types of Moroccan spices.

Image Courtesy of Wikimedia and M3allemBennay.
2

Souk es-Sabat is a very popular shopping spot in Rabat. The Souk es-Sabat is a great place to purchase shoes, leather and jewelry. You can also find traditional babouches, musical instruments and many other items.
Image Courtesy of Flickr and Omer Simkha.
3

rue Souika is one of the biggest and most popular shopping spots in Rabat. The place is great not only for shopping, but also to wander around and observe the local colors. The place is great to pick up a perfect gift for loved ones at home. All kinds of clothes, shoes, jewelry, carpets, crafts, pottery and many other unique and interesting things can be found here.
Image Courtesy of Wikimedia and Cimoi.
4

Marché Central is located downtown and it is one of the most popular markets for food and local specialties among locals as well as tourists. The market was built in the 1920s on the site of an older market that was named Souk Tben. The place is huge and fascinating and all kinds of food, fruit, meat, fish and other local food specialties, as well as flowers, can be found here.
Image Courtesy of Flickr and cliffwilliams.

Resting on the shores of the Bouregreg River and Atlantic Ocean, the capital city of Morocco, Rabat, is known for its picturesque natural surroundings, much as for its man-made beauty manifested in a mix of old and new architecture (featuring Islamic and French-colonial styles), abundance of mosques and historic monuments. The Medina (Old City) of Rabat is a World Heritage Site.