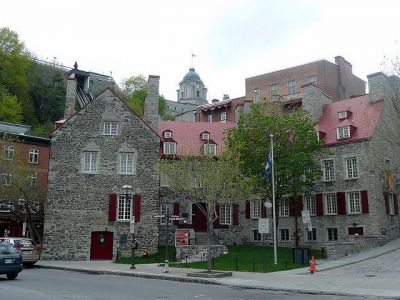 The mid-18th-century classical French Maison Chevalier is another fine example of urban architecture in New France. A former hotel, it was the ﬁrst building in the Place-Royale area to be restored in the 1950s. The current structure is really three separate houses from three distinctive periods: Maison de l'Armateur Chevalier (home of a former shipowner), built in a square in the 1750s; Maison Frérot, with a mansard roof (1683); and Maison Chesnay, dating from 1660.

All three houses were repaired or partially rebuilt following the British Conquest. As a group, they were rescued from deterioration by Gérard Morisset, the influential director of an art works inventory, who suggested that they be purchased and restored by Québec's government, which in turn has prevented the demolition of the Royal Square itself.

With the iconic Château Frontenac visible in the background, this is an excellent place to walk around while soaking in the area's beauty and history. During the Quebec Carnival in February, it's also a great place for traditional music evenings.
Image Courtesy of Flickr and Reading Tom.