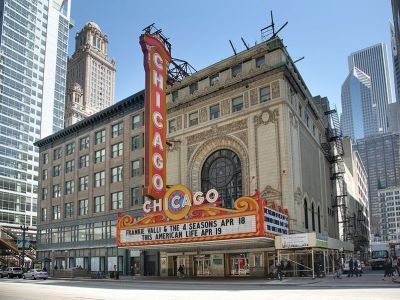 The Chicago Theatre, originally known as the Balaban and Katz Chicago Theatre, is a landmark venue located on North State Street in the Loop area of Chicago. With a seating capacity of 3,880, it was promoted as the "Wonder Theatre of the World" when opened on October 26, 1921. Now listed as a Chicago Landmark and National Historic Place, the Chicago Theatre is a performing arts venue for stage plays, magic shows, comedy, speeches, and popular music concerts. Its iconic marquee, "as an unofficial emblem of the city", appears in film, television, artwork, and photography. The building stands seven stories tall and fills nearly one half of a city block. The interior shows French Baroque influence from the Second French Empire. The grand lobby, five stories high and surrounded by gallery promenades at the mezzanine and balcony levels, is influenced by the Royal Chapel at Versailles.

Why You Should Visit:
Ornate classic theater with an old-school ambiance; beautiful lobby and plenty of decorations to see inside before a show starts.
The daily 12 PM tour takes you throughout the building, its history, construction and curiosities, and you even get to go on the stage.

Tip:
There is much to do in the vicinity – shopping/restaurants/other theaters, so if you arrive too early, you can grab a bite or drink nearby.
Even if you don't see a show here, you have to at least snap a pic from the outside!
Image Courtesy of Wikimedia and Daniel Schwen.
Sight description based on Wikipedia.