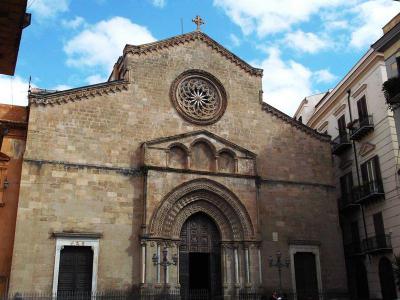 The Church of Saint Francis of Assisi, colloquially known as San Francesco d'Assisi, is one of the few remaining buildings from the Renaissance era in Palermo. It represents the main Conventual Franciscan church of Sicily, and has the title of Minor basilica, granted by Pope Pius XI in 1924.

The history of this church starts with the arrival of the Franciscans in Sicily in 1224. Shortly after that, however, the local clergy, supported by the Saracens, chased the friars out of the city, who then appealed to the Pope Gregory IX. With the pontiff's support, they built a new convent in 1235, which again, because of the quarrels with the Pope, was subjected to destruction by Frederick II in 1239.

In 1255, the Vicar general of Sicily, Ruffino Gorgone da Piacenza, chaplain of Pope Alexander IV, finally asserted the Franciscans' presence on the island and entrusted their church reconstruction to the bishop of Malta, Roger. In 1302, the main portal and the anterior façade were built, both in Chiaramontan-Gothic style. In the 15th century, several chapels were added, in Gothic and Renaissance styles, including the Chapel Mastrantonio, being the first manifestation of the Renaissance in Sicily.

On 5 March 1823, the building was severely damaged by an earthquake, and was subsequently restored in Neoclassical style. Other damages, including those from air raids during World War II, and ensued restorations over the following decades, resulted in the church featuring a mixture of styles – mainly Gothic and Sicilian Baroque.

Presently, the church of Saint Francis plays an important role in the religious life of Palermo, as a home to the Simulacrum of the Immaculate Conception used in the procession that passes through the streets of the historic center each year, on December 8.
Image Courtesy of Wikimedia and Fabio P..
Sight description based on Wikipedia.