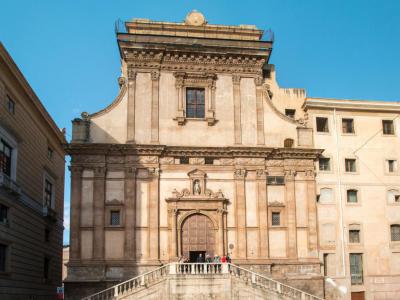 The Church of Saint Catherine, otherwise known locally as the Church of Santa Caterina delle Donne, is found in the heart of the historic center of Palermo, between Piazza Bellini and Piazza Pretoria.

In 1310, following a testament left by the rich local aristocrat, Benvenuta Magistro Angelo (Mastrangelo), the area, previously occupied by the palace of George of Antioch, admiral of Roger II of Sicily, was secured for the foundation of a Dominican convent, complete with a church. The new nunnery was dedicated to Saint Catherine of Alexandria.

In 1532, the church was expanded, and between 1566 and 1596 was further remodeled under the supervision of the Mother Prioress Maria del Carretto. It was inaugurated on 24 November 1596.

The building represents a synthesis of Sicilian Baroque, Rococo and Renaissance styles, manifested in the combination of texture, sculptures, mixed marble, stucco, and frescoes. For a long time, its design was attributed to Giorgio di Faccio, the architect of another church in Palermo, of San Giorgio dei Genovesi. However, more recent studies reveal the involvement of two other architects, such as Florentine's Francesco Camilliani and Lombardia's Antonio Muttone, who had been involved in the construction of Piazza Pretoria. The dome was designed by Francesco Ferrigno. The inner ornamentation dates back to the 17th and 18th centuries.

During the 19th century, the church was damaged on several occasions, namely: the uprising of 1820-1821, the Sicilian revolution of 1848, the Gancia revolt (1860), and the Seven and a Half Days revolt (1866).
Image Courtesy of Flickr and Andrea Schaffer.
Sight description based on Wikipedia.