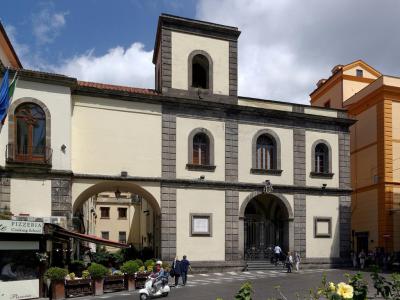 Leaving Tasso Square, walk along De Maio Street. After a short walk arrive at the Saint Antonino Square. The church will be on the right. Saint Antonino is the patron saint of Sorrento. He arrived in Sorrento in the 6th century, seeking refuge from the Lombard invasions of Italy.

One day a whale came up to the beach at Sorrento and swallowed a boy. Not to worry. Antonino got the boy out, safe and sound. Saint Antonino is credited with this and other miracles and he is the patron saint of shipwrecked seafarers. At the entrance to the church is a set of whale bones to memorialize the miracle of boy meets whale.

The Church of Saint Antonino, built in the 11th century, stands over a 7th century oratory built to cover the bones of the Saint. The grey tuff facade is Romanesque. The facade and the bell tower date from the 18th century. There are three naves divided by twelve Corinthian style columns salvaged from ancient Greek and Roman buildings.

At the time of his death, the story goes, Saint Antonino said he did not wish to be buried within or without the city. So, he was put to rest between the walls. In the crypt is a life-like statue of the saint. On one wall are paintings of ships at sea. On another wall are silver talismans of believers who were saved by his grace.
Image Courtesy of Wikimedia and Berthold Werner.

Want to visit this sight? Check out these Self-Guided Walking Tours in Sorrento. Alternatively, you can download the mobile app "GPSmyCity: Walks in 1K+ Cities" from iTunes App Store or Google Play. The app turns your mobile device to a personal tour guide and it works offline, so no data plan is needed when traveling abroad.