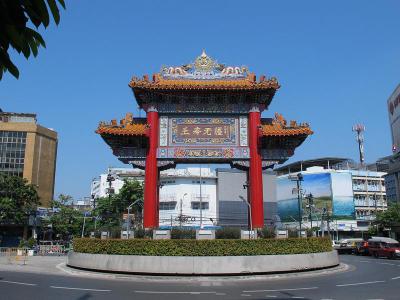 Built in 1999 as part of the celebrations of King Bhumibol Adulyadej's 72's birthday, the Chinatown Gate is sometimes called "Odean Gate" after the Odean cinema that once stood nearby. The words on the gate say "Sheng Shou Wu Jiang", translated as "Long Live the King". During Chinese New Year celebrations, the gate becomes the center of activities where people make their offerings.

Chinatown Gate is the entrance to many sites, a brief description of which is given below:

- Wat Traimit, a small temple, home to the world's largest five-ton-plus solid gold Buddha image;
- Li Thi Miew Temple, one of the more open and accessible of many Chinese temples in Chinatown;
- Wat Kanikaphon, a small temple with some interesting details, founded by a former Madame who owned a brothel;
- Tien Fa Charity, a small clinic run by a charitable foundation, with a large chapel to the goddess Ming in its courtyard;
- Sampaeng Lane, Chinatown's original main street, now a small narrow alley crowded with shops selling mostly inexpensive household items and a very old Chinese pharmacy – definitely worth a look;
- Wat Mangkon Kamalawat, the Chinese-Buddhist temple – a center of festivities during important festivals such as the Chinese New Year and the vegetarian festival;
- Phahurat Market, a small community center for Sikhs and other immigrants from the subcontinent, home to a large number of fabric and wedding stalls;
- Wat Chakrawat, one of Bangkok's three biggest monasteries, housing some very unusual buildings and a few crocodiles!;
- The Old Siam, a shopping center where you will find tourist-friendly western and Thai restaurants and fast food outlets.

In short, Chinatown Gate gives you the visa to enter into a whole new world to explore and enjoy!

Tip:
Plan ahead so you can visit the top spots and leave room in your stomach for the unexpected – but be sure to eat where the locals are queueing.
Image by leo.laempel on Flickr under Creative Commons License.