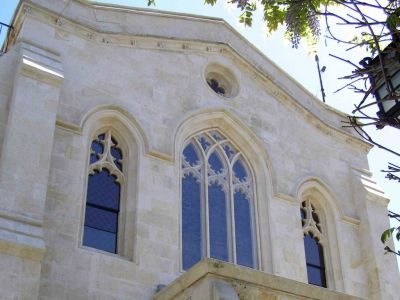 Built in 1849, this elegant Neo-Gothic style church just across the street from Jaffa Gate proudly holds the title of the oldest Protestant building in Jerusalem, and indeed all the Middle East. Often called the "Jewish Protestant Church", it is as unique as it is controversial; when writing about the establishment of this community of faith, a historian once called it one of the weirdest moments in all Christendom.

Taking the Apostle Paul's example seriously, the foremost mission for the group was to evangelize the Jews. The founders also felt that Biblical prophecy pointed to the fact that Zion would come to know Jesus as the true Messiah. As far as the outside world goes, the building would be a reminder of the need to always remember the contribution of God's chosen people, hence why it was built with lots of symbolic artwork that point back to promises made in the Bible. One can also find ornate stained glassed windows – which sport Jewish symbols – in the sanctuary, while the altar area is adorned with a beautiful version of the Hebrew Ten Commandments.

Tip:
Adjacent to the property, Christ Church also manages a well-priced guest house, along with a coffeehouse, a restaurant, and a bookstore with good postcards and souvenirs. If you just want a full meal, go through the coffeehouse and up to the restaurant (but don't forget to buy a meal ticket at the guest house).

The Old City of Jerusalem is indeed very old; probably came into being more than 4,500 years ago. The defensive wall around the city, built by Ottoman sultan Suleiman the Magnificent in the 16th century, features a number of gates, just as ancient, each of which is an attraction in its own right. Prophesies about some of these gates are written in the Bible and the Koran. This self-guided tour...  view more