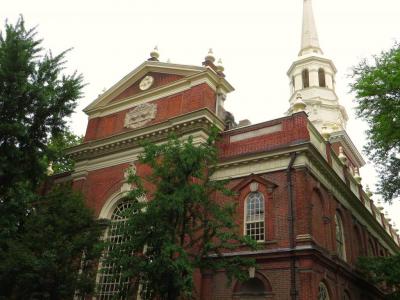 Founded in 1695, Christ Church is considered one of the finest Georgian structures in America. It is often called the "Nation's Church" for having hosted members of the Continental Congress, including Washington, Adams, Rush, Franklin, and others.

The building itself is large and impressive. It was the town's tallest at the time and, for some 50+ years, the tallest structure in the U.S. Outside, the walkways are lined with the graves of early church members. One may recognize a few as being signers of the Declaration of Independence. Christ Church was a site where many famous Americans worshiped during the country's founding, and the pews are labeled with their names.

One of the most striking aspects of the place is that the windows are not stained-glass, but are clear, letting in not only the daylight but pristine views of the outdoors. That is very unusual for churches of the era, but it makes the interior quite lovely and bright. Docents are there to answer questions.

Tip:
Don't miss the historical collection, including the 14th-century baptismal font in which William Penn was baptized, along with a rare book collection.
Image Courtesy of Flickr and Ken Lund.