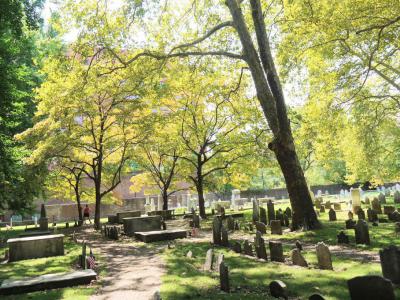 Christ Church Burial Ground in Philadelphia is an important early-American cemetery, which is still active. Despite the name, it is actually three blocks west of Christ Church. The land was acquired in 1719 when the church's property was full, and the new land was on what was back then considered the outskirts of town.

Christ Church is an Episcopal church founded in 1695, and it was the place of worship for many Revolutionary War participants, including George Washington.

Here is the final resting place of many historic national figures and prominent Philadelphians, including Benjamin Franklin and his wife Deborah, as well as four other signers of the Declaration of Independence: Benjamin Rush, Francis Hopkinson, Joseph Hewes, and George Ross. Two more signers (James Wilson and Robert Morris) are buried at Christ Church itself.

The Burial Ground is open to the public for a small fee. When the Burial Ground is closed, one can still view Benjamin Franklin's gravesite from the sidewalk at the corner of 5th and Arch Streets through a set of iron rails. The rail opening in the brick wall was added for public viewing in 1858 at the request of the Franklin Institute.

It is an old Philadelphia tradition for people to leave pennies at Franklin's resting place.

Further away from Franklin, the visitors can see a small but neatly kept space with lesser-known graves, some of which are also quite interesting.
Image Courtesy of Flickr and Eden, Janine and Jim.