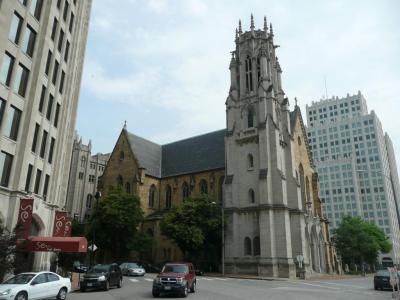 Christ Church Cathedral in Saint Louis was designed by architect Leopold Eidlitz and built between 1859 and 1867. The Gothic revival structure was an expression of the city's sense of its significance as the United States expanded westwards. It was designated a National Historic Landmark in 1994.

Located in what is now downtown at Thirteenth and Locust streets, it was one of the earliest churches influenced by the revival within the Episcopal Church of early Christian practices and styles, which later was influenced by the Oxford Movement originating in England. The main body of the church was built of Illinois sandstone. A smaller sandstone chapel dates to 1893-95. From 1910-1912, a tower and porch were added of Indiana limestone.