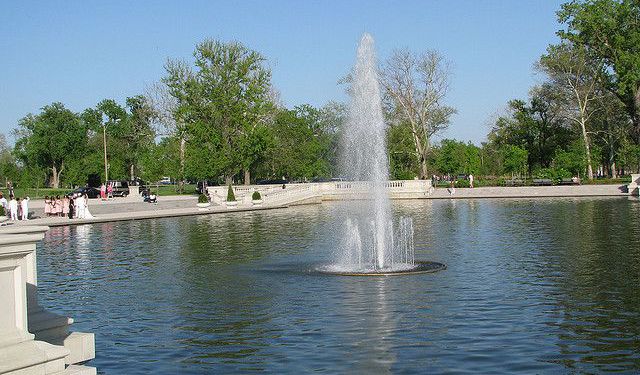 Saint Louis boasts a number of entertaining and educational facilities such as museums, zoos and parks. Among the latter, the most outstanding is Saint Louis Forest Park, established in 1876. The park represents an ideal location for a great time out. Take this self guided walking tour to discover the most visited tourist attractions in Saint Louis Forest Park.
Image Courtesy of Flickr and binkle_28.
How it works: Download the app "GPSmyCity: Walks in 1K+ Cities" from iTunes App Store or Google Play to your mobile phone or tablet. The app turns your mobile device into a personal tour guide and its built-in GPS navigation functions guide you from one tour stop to next. The app works offline, so no data plan is needed when traveling abroad.

In 2000, the Emerson Center, a significant building addition, was completed, boosting attendance and exhibition capacity. The Emerson Center was selected by the American Institute of Architects' Committee on the Environment as an example of architectural design that protects and enhances the environment. It is an example of a green museum. Its permanent collection includes both national artifacts as well as Missouri- and St. Louis-related materials, such as local colonial and native items, Louisiana Purchase Exposition artifacts, and memorabilia relating to Charles Lindbergh and his trans-Atlantic flight in the "Spirit of St. Louis". A replica of the "Spirit of St. Louis" can be found here, too. A large number of artifacts from the Lewis and Clark Expedition are also housed in the permanent collection. Admission to it is free; however, certain exhibits require a ticket.

Why You Should Visit:
Friendly staff, wonderful location right in Forest Park, and great exhibits make it a good place for a family outing that educates, entertains and inspires.

Tip:
Check to see if current exhibits are of interest to you. If not, it's still nice to look at the fascinating gift shop and sit down for an upscale lunch at a reasonable price (not typical for a museum).


Image Courtesy of Wikimedia and Marcus Qwertyus.
Sight description based on Wikipedia.
2

The Grand Basin is one of the best and oldest attractions of Saint Louis Forest Park. It dates back to 1904 when it was the center of the World's Fair. Nowadays, after a thorough renovation, the Basin looks magnificent with its eight fountains and charming promenades. It is a favorite spot for taking photographs, especially at night, when the Basin is beautifully lit.

Tip:
Even on the hottest St. Louis summer day, the Grand Basin provides a cool breeze and the large trees provide ample shade. Best place for a picnic!
Image Courtesy of Flickr and david_shane.
3

In addition to the featured exhibitions, the Museum offers rotating exhibitions and installations. These include the Currents series, which showcases contemporary artists, as well as regular exhibitions of new media art and works on paper. The Saint Louis Art Museum began in 1881 as the Saint Louis School and Museum of Fine Arts, an independent entity within Washington University in St. Louis. Originally housed in a building in downtown St. Louis, the Museum moved to its current location in Forest Park after the 1904 World's Fair. During the 1950s, the Museum added an extension to include an auditorium for films, concerts and lectures. The collection of the Saint Louis Art Museum contains more than 30,000 artworks dating from antiquity to the present.

St. Louis Zoo is a perfect family fun destination. The 1904 St. Louis World's Fair is credited for the birth of the local zoo. The Fair brought the world's attention to the city and Forest Park in particular. The Smithsonian Institution constructed a walk-through bird cage for the World's Fair. Ten days after the World's Fair closure, the citizens of St. Louis chose to buy the 1904 World's Fair Flight Cage for $3,500, rather than have it dismantled and returned to Washington, D.C. This was the first piece of what would become the St. Louis Zoo.

Today, the Zoo hosts an array of animal and bird species from all over the world, including Asian elephants, hippos, cheetahs and many others. There is also a Children's Zoo with Monsanto Insectarium and butterfly garden. A particular attention deserves the charming Hermann Fountain. For a good look around the Zoo, hop on a small train to give your kids a true joy ride.

Why You Should Visit:
Free zoo with world-class exhibits and special events on some evenings. It's walkable, clean and there are areas indoors and out (if you need a break from the weather).

Tip:
You're unlikely to be able to see all you want in a single day, so spend some time online and select your preferences.

Located on Government Hill, the World's Fair Pavilion opened in 1910 as a gift from the Louisiana Purchase Exposition Committee; it helped fulfill their promise to restore the park after the 1904 World's Fair. The Pavilion offers breathtaking views of the park, and is a beloved spot for weddings and other events. There is a great combination of outdoor beauties and indoor facilities. The fountain in front of the Pavilion makes it particularly attractive.
Image Courtesy of Flickr and Paul Sableman.
Sight description based on Wikipedia.
6

The Muny Theater in Forest Park was opened in 1918 and is the nation's oldest outdoor Greek-style amphitheater. Since opening, the theater has had a good number of more or less famous actors perform on its stage. Quality musicals along with a great location have won The Muny its reputation of an ideal spot for a beautiful summer night outing. Operating only in summer, the theater can seat up to 11,000 spectators. The Muny seasons run every year from mid-June to mid-August. It is run by a not-for-profit organization.

Why You Should Visit:
The place to go if you want to enjoy a fun, inexpensive night under the stars. Located in a gorgeous park with lots of amenities.
You can spend the day biking, going to a museum, riding a paddle boat or having a picnic – then head over for a nighttime performance at The Muny.

Tip:
If there's a show that you have been dying to see, splurge and get tickets closer to the front – in section A or closer – or use binoculars and you will not miss a thing.

The Jewel Box is a greenhouse in St Louis Forest Park. After renovation it appears particularly stunning, featuring glass walls and Art Deco architectural style. Apart from various wonderful flowers, here you will find a fountain of matching beauty in the middle of the building. The structure boasts all the modern amenities and is a popular venue for weddings.
Image Courtesy of Flickr and David Wilson.
8

The Saint Louis Science Center is a collection of buildings which incorporates a science museum and planetarium in the southeastern corner of Forest Park. With over 750 exhibits in a complex of over 300,000 square feet, it is among the largest of its type in the country, and according to the Association of Science and Technology Centers, is one of the top five science centers in the United States. As of 2007, the complex hosts 1.2 million visitors each year, with another 200,000 served through offsite programs at schools and community centers.

The first building of the current complex, the Planetarium, opened in 1963, hosting about 300,000 visitors per year. In 1983, it was combined with an existing Museum of Science and Natural History that had been located in Clayton, upon which the Planetarium was renamed the Saint Louis Science Center. In 1991, a major expansion increased its size seven-fold, adding a main building and Omnimax theater. In 1997, an air-supported building, the Exploradome, was added next to the main facility, and in 2003, a Community Science Resource Center southeast of the main building was added to the complex. The northern and southern sections of the Science Center are connected via a pedestrian bridge over the interstate, which also has science exhibits, such as radar guns that the visitors can use to investigate traffic patterns.