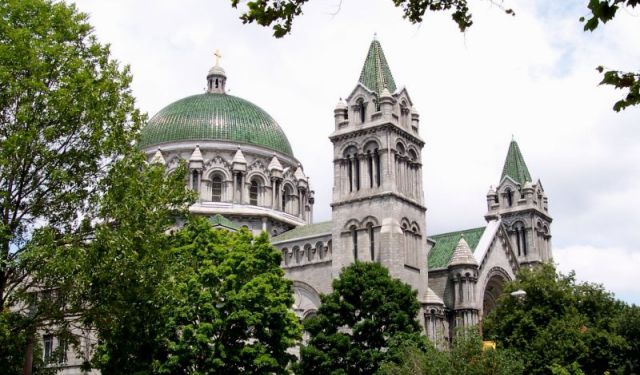 Saint Louis is considered the perfect destination for those who want to see great architecture that also has an important spiritual value. This old city features some of the famous and interesting churches in the USA as well as other well known religious buildings. Take this self guided walking tour to visit the beautiful religious buildings in Saint Louis.
Image Courtesy of Wikimedia and Colin.faulkingham.
How it works: Download the app "GPSmyCity: Walks in 1K+ Cities" from iTunes App Store or Google Play to your mobile phone or tablet. The app turns your mobile device into a personal tour guide and its built-in GPS navigation functions guide you from one tour stop to next. The app works offline, so no data plan is needed when traveling abroad.

The Church of St. Mary of Victories is a historic Roman Catholic church in downtown St. Louis. It was established in 1843, and was the second Catholic Church to be built in the city. It has been listed on the National Register of Historic Places.

The church was built to serve the needs of about 500 families who had emigrated from Germany. It is located in the hub of the pioneer "Chouteau's Landing" District, one of the early commercial and residential neighborhoods where the German immigrants settled in pre-Civil War era St. Louis.

The 1950s saw the departure from the city of a large number of the families whose German ancestors had worshiped there. They were replaced by a large community of refugees from Hungary after World War II and the 1956 Hungarian Uprising. They gave new life to the parish, which became unofficially called the "Hungarian Church".

George I. Barnett and Franz Saler, the distinguished architects of St. Mary's Church, designed it in accordance with that of the early 16th-Century Mannerist style. The nave is rectangular and, with the transept, forms a cross with the sanctuary at its head. The choir loft is located on the second tier of the two-tier balcony at the rear of the church. Its ornate wooden-carved organ case and stenciled display pipes are among the oldest in St. Louis.

The interior of St. Mary of Victories is also remarkable as the first interior in a St. Louis church whose design was based upon liturgical studies. It was developed and constructed by Max Schneiderhahn, the city's first professional church artist. Himself a German immigrant, Schneiderhahn studied at a German university and two monasteries, bringing the craftsmanship tradition of liturgical art to the St. Louis area. The altars, statuary, steepled baptismal font, communion rail, carvings and frescoes were all conceived and executed by Schneiderhahn, who also painted the Stations of the Cross.


Image Courtesy of Nheyob.
Sight description based on Wikipedia.
2

The church is located near the historic riverfront of St. Louis, surrounded by the Gateway Arch grounds. Because of the historical significance, it was left intact while all the neighboring buildings were demolished to make way for the Gateway Arch. The basilica remains a popular church for marriage ceremonies in the archdiocese and a popular tourist destination.

Why You Should Visit:
You would be hard-pressed to see more exquisite mosaics on the U.S. soil. Every inch of the wall, ceiling, and floor here is an amazing thing to look at.

The Centenary Methodist Episcopal Church, South in St. Louis, is a Gothic Revival church that was built in 1869. It was listed on the National Register of Historic Places in 1997.

The building is a two-story limestone church linked with a three-story office/service building. It was designed by Baltimore architect Thomas Dixon and its construction was supervised by local architect Jerome B. Legg. A three-story brick and stone addition to the west was added in 1924, designed by St. Louis architects Mauran, Russell & Crowell.
Image Courtesy of Flickr and TagDragon.
Sight description based on Wikipedia.
4

Christ Church Cathedral in Saint Louis was designed by architect Leopold Eidlitz and built between 1859 and 1867. The Gothic revival structure was an expression of the city's sense of its significance as the United States expanded westwards. It was designated a National Historic Landmark in 1994.

Located in what is now downtown at Thirteenth and Locust streets, it was one of the earliest churches influenced by the revival within the Episcopal Church of early Christian practices and styles, which later was influenced by the Oxford Movement originating in England. The main body of the church was built of Illinois sandstone. A smaller sandstone chapel dates to 1893-95. From 1910-1912, a tower and porch were added of Indiana limestone.
Image Courtesy of Flickr and Reading Tom.
Sight description based on Wikipedia.
5

The Shrine of St. Joseph is a Catholic church in Columbus Square in St. Louis. The church had its beginning in 1843 when the Jesuits founded the parish to serve a pleasant residential community consisting mostly of German immigrants. Also, the Church is the site of the only authenticated miracle in the Midwest. After founding the parish in 1843,the Jesuits immediately instituted to build a church. Two years after 'St. Peter Claver’s Miracle', it was decided to build a large addition to the old building and to revise the structure so that the entrance faced on Biddle Street. Bishop Kenrick laid the cornerstone for this second St. Joseph in 1865. Bueschers of Chicago, famous for their religious art work, were employed to carve an elaborate altar, which is designed as a replica of the Altar of St. Ignatius in the Jesuit Gesu Church in Rome, except that the figure of St. Joseph and the Christ Child are substituted for the figure of St. Ignatius. Known as "The Altar of Answered Prayers" because of its origin, this beautiful work can still be seen at St. Joseph's Shrine, where it serves as the central altar.

In 1880 the church was once again enlarged and remodeled. This work, which included the addition of an elaborate Romanesque Face and twin towers surmounted with delicate cupolas, was completed in 1881. Further alterations had to be made in 1954, for reasons of safety, the beautiful original towers were shortened, and the cupolas replaced by heavier, hexagonal caps.

This is an historic and beautiful Catholic church still operational, so please be respectful when visiting.
Image Courtesy of Flickr and Paul Sableman.
Sight description based on Wikipedia.