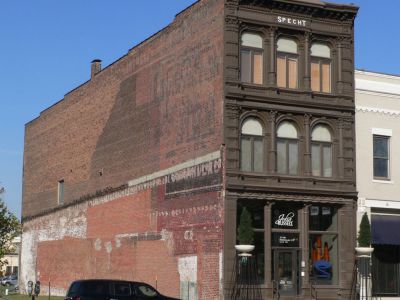 The Christian Specht Building is located at 1110 Douglas Street in downtown Omaha. It is the only existing building with a cast iron facade known in Nebraska today, and one of the few ever built in the state. The building was deemed an Omaha landmark in 1981, and was listed on the National Register of Historic Places in 1977.

Designed by local architects Dufrene and Mendelssohn in 1884, the three-story Specht Building was modeled in the Italian Renaissance Revival Style. This was a popular style for cast-iron facade buildings. Christian Specht's company, the Western Cornice Works, manufactured the facade. The company was a manufacturer of galvanized iron cornices, finials and other metal building products.

Today the building is renowned for its artistic value by representing this period's usage of iron. In 2001 the Omaha Performing Arts Society proposed building an arts center adjacent to the Specht Building. Plans called for the demolition of the entire block the Specht Building sits on, including the Specht and four neighboring historic buildings. Pressure upon the major donors of the performing arts center and the donors requested that the buildings be spared. After negotiations the plans were saved and the location of the buildings was intact. The Specht Building was remodeled thereafter and is now loft apartments.
Image by Ammodramus on Wikimedia under Creative Commons License.
Sight description based on wikipedia