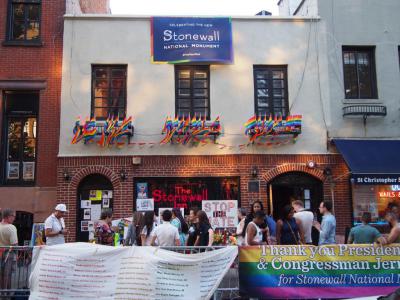 Though newer LGBT generations have taken their business to places like Chelsea, Hell's Kitchen, and parts of Brooklyn these days, Christopher Street continues to be the symbolic heart of NYC's lesbian and gay community, having played host to an influential and sexually permissive bohemian scene.

Here, among the cafés, leather and adult shops, is the site of the formerly Mafia-run Stonewall Inn (now a gay-pride-flag-waving karaoke bar with the same name) and of the eventual Stonewall Riots of 1969 – a series of spontaneous, violent demonstrations described as "one of the most, if not the most, pivotal event leading to the liberation of queer rights". Just across the street, the gated triangle known as Christopher Park is where commemorative statues of four life-size white-painted figures (a gay couple and a lesbian couple) have posed for pictures since their unveiling in 1992, joined by two monuments to Civil War heroes.

Down Christopher St, at No. 121, you'll find the historic Lucille Lortel Theatre – one of Off-Broadway's most notable showplaces for new work and revivals by both established and up-and-coming playwrights, where major figures like Eugene Ionesco and Edward Albee have their name engraved into the sidewalk's solid bronze stars.
Image Courtesy of Wikimedia and Rhododendrites.