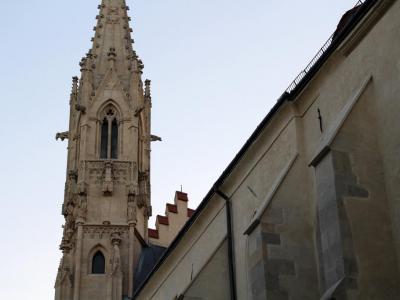 Church and Nunnery of the Order of the Sisters of St. Clare, Bratislava

Currently the site of a Bratislava concert hall, the Church and Nunnery of the Order of the Sisters of St. Clare dates back to the 14th century. The church was originally held by the Order of the Sisters of St. Clare, also known as the Sisters of Poor Clare, which was an order of nuns in the Roman Catholic Church founded by Clare of Assisi in 1212 C.E. The structure is a amalgamation of Baroque and Gothic styles with a fantastic five-sided tower as its most dominant characteristic. The tower can be seen from all over the city of Bratislava. The tower has a folktale attached to it which involves a knight who is said to have fallen intensely in love with one of the nuns in the abbey but, he was never able to act on his love. The legend says that he erected the tower as compensation to the Mother Superior for permitting him to wed the nun but, the Mother Superior did not satisfy the promise, and consequently broke the young knight’s heart. Over the years, the convent has been used for several purposed including as a school which educated several famous Slovakians like Béla Bartók and Jozef Murgaš.
Image by Opticky klam on Wikimedia under Creative Commons License.

Create Your Own Self-Guided Walks in Bratislava
Sight Name: Church and Nunnery of the Order of the Sisters of St. Clare
Sight Location: Bratislava, Slovakia
Sight Type: Religious
Guide(s) Containing This Sight: