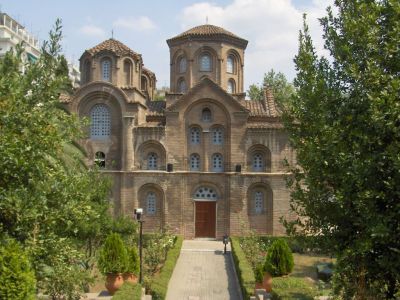 The Church of Panagia Chalkeon is an 11th-century Byzantine church. According to the founder's inscription above the west entrance, the church was built in 1028 by the protospatharios Christopher and his family. The ground plan is that of a classic "cross-in-square-form" typical of Macedonian-period architecture, with four columns and three domes. The entire building is built of bricks, which gave it the popular nickname "the Red Church." The exterior is enlivened with a variety of arches and pilasters, elements which can be traced to Constantinopolitan influence. The use of arches with several setbacks gives the building a "sculpted" appearance. In the interior, most of the carved marble decoration, as well as frescoes from the 11th and 14th centuries, have been preserved.
Image by Konstantinos Stampoulis on Wikimedia under Creative Commons License.
Sight description based on wikipedia