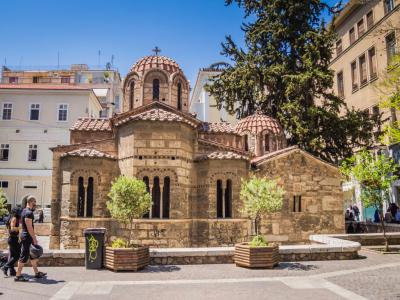 Standing in the center of modern-day Athens, right in the middle of the high-traffic shopping area of Ermou Street, this nice little Byzantine church is one of the city's oldest, having been built perhaps around 1050. As common with early Christian edifices, this was built over an ancient Greek temple dedicated to the worship of a goddess, possibly Athena or Demeter.

When King Otto I of Greece brought the Bavarian architect Leo von Klenze to draw the new city plan of Athens, the church was considered for demolition but, thankfully, the King of Bavaria, Ludwig I intervened and one can still admire its magnificence; the fact that it seems out of place only adding to that.

Presently, it is formed by a complex of three different units attached together, built in succession. The interior is filled with ancient mosaics and a gorgeous icon stand. The exterior has attractive stone and brickwork which gives it a beautiful exterior appearance as well. The church is very well maintained and many people drop in for a prayer.

Hours are irregular but if open, it is worth stopping by.
Image by Randy Connolly on Flickr under Creative Commons License.