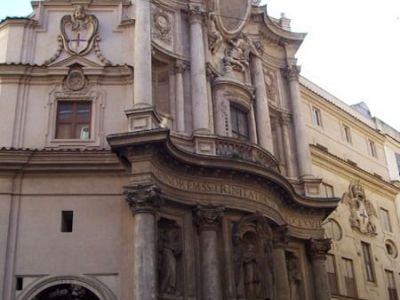 Church of Saint Charles at the Four Fountains, Rome

The Church of Saint Charles at the Four Fountains (Italian: Chiesa di San Carlo alle Quattro Fontane also called San Carlino) is a Roman Catholic church in Rome. The church was designed by the architect Francesco Borromini and it was his first independent commission. It is an iconic masterpiece of Baroque architecture, built as part of a complex of monastic buildings on the Quirinal Hill for the Spanish Trinitarians, an order dedicated to the freeing of Christian slaves. He received the commission in 1634, under the patronage of Cardinal Francesco Barberini, whose palace was across the road. However, this financial backing did not last and subsequently the building project suffered various financial difficulties. It is one of at least three churches in Rome dedicated to San Carlo, including San Carlo ai Catinari and San Carlo al Corso.

The monastic buildings and the cloister were completed first after which construction of the church took place during the period 1638-1641 and in 1646 it was dedicated to Saint Charles Borromeo. Although the idea for the serpentine facade must have been conceived fairly early on, probably in the mid-1630s, it was only constructed towards the end of Borromini's life and the upper part was not completed until after the architect's death. The site for the new church and its monastery was at the south-west corner of the "Quattro Fontane" which refers to the four corner fountains set on the oblique at the intersection of two roads, the Strada Pia and the Strada Felice. Bernini's oval church of Sant'Andrea al Quirinale would later be built further along the Strada Pia.
Image by MarkusMark on Wikimedia under Creative Commons License.
Sight description based on wikipedia